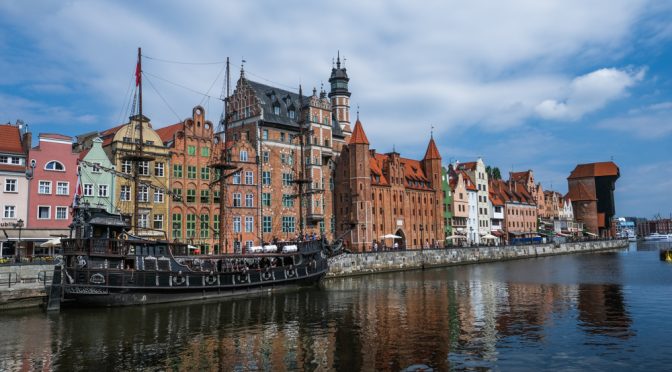 This turned out to be one of my favorite cities of the cruise.  The original  buildings of Old Town were reconstructed after suffering major damage in the second world war.  The old and new contemporary buildings which mimic the Dutch Style sit smartly across the Motlawa River from each other.

We entered the city at the Green Gate and wandered toward St. Mary’s Church, the centerpiece of Old Town.  Her construction began in the 14th century and is considered one of the three largest brick-built churches in the world.

Ulica Mariacka,  is a cobblestone street edged by narrow merchant homes, each with little terraces a few steps up from the streets. I expected to see Hansel and Gretel around the next corner, skipping along in their Lederhosen.  I’m not sure they wear Lederhosen in Poland, but considering our surroundings they should.

In the 13th century little did the citizen know by welcoming vessels from England, Sweden and the Walloon Lands the Teutonic Knights would massacre several thousand of them and rule their land for 100 years.  In the 15th century the Poles and Lithuanian forces defeated the Knights and stopped the German expansion eastward. For almost one hundred years the city enjoyed prosperity.  Germans, Polish, Dutch, Russian, Jewish and Scotsmen made up the population.

In the 18th century, Tsar Peter the Great besieged it with the Russian army.  Gdansk, now known as Danzig, loses its trade routes and falls into decline.   In 1795 Austria, Prussia and Russia impose a third partition of Poland, ending Polish independence for more than a century and wipe the country from the map completely.

Napoleon seizes Gdansk as he advances eastward in the 19th century.  His French troops are stationed there and it is declared a free city.  A train line was established to Berlin and the town quickly grows into an elegant resort.

Poland regains independence in 1918.  Hitler’s demand Gdansk be returned to Germany and Poland’s refusal was used as provocation for its attack on Poland on September 1, 1939 which precipitated World War II.  Over six million Poles were killed at the Stutthoff death camps.  In 1945 the Russians took Poland and the German population was expelled and the city rebuilt.

In 1980 the Gdansk Shipyard was the birthplace of the Solidarity Trade Union Movement, led by Lech Walesa.  The movement overthrew the Communist regimes of the former Soviet bloc and Walesa became President of Poland in 1990.

Late in the afternoon as we walked to the ship, the sky darkened and it began to rain turning the vibrant buildings into shades of gray.