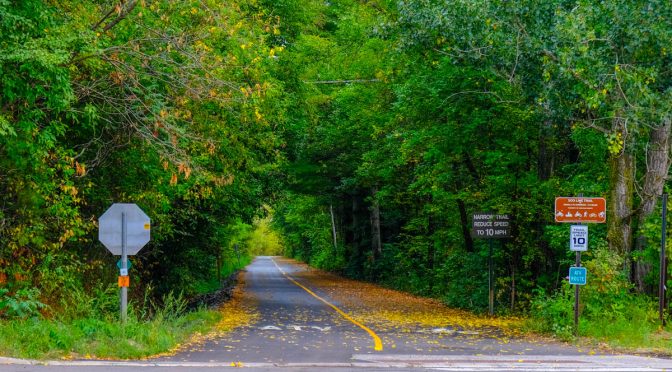 Minnesota opened her arms and welcomed us with a tornado warning.

Our history of natural disasters included our stay in Lockport, Nova Scotia while Hurricane Dorian churned the ocean and his winds tore down trees and buildings along the shore; being swallowed and blinded in a violent dust storm known as a “Haboob” on a drive home through Yuma, Arizona; and watching a curtain of rain from a monsoon erase homes across the fairway from view and flood the golf course.  We did not want to add surviving a tornado to our list.While standing in line at a Moose Lake coffee shop waiting for our apple fritters and lattes, a gentleman asked us if we knew about the possible tornado.  We told him we had not.

We said we were on our bikes and about 9 miles from our Sturgeon Lake camp.  He said it might be best if we cut our Munger Trail ride short and get back to safety.   We agreed.  Back at camp we stopped at the office to ask the manager what we should do if a tornado touched down.  She shrugged and told us if the wind picked up and violently rocked the coach from side to side take shelter in the laundry room.  I couldn’t help thinking if it came to that; it might be too late to make a run for it.

While we were securing the bikes to the coach we looked around.  The tall pines would certainly make it impossible to see a funnel drop from the sky.  We would never see it coming. We climbed inside the coach to wait.  Over the course of the next thirty minutes, we watched families in the surrounding camp sites jump into their vehicles and drive away.  Terry and I looked at each other with the same thought…..now what?  Perhaps we would get lucky and the storm would pass us by.  That was wishful thinking.  The storm struck with a vengeance.  Thunder boomed overhead and lightning bolts illuminated the trees.

It rained so hard within a few minutes there were swimming pool size ponds surrounding the coach.

After about an hour there was a lull in the storm.    We pulled the slide into the body of the coach and watched gallons of water cascade down the face of the window.

The Doppler radar map reported three more back-to-back storms headed our way.  We spent a sleepless night listening to the wind and rain.  The next morning we opened the door to blue skies and a gentle breeze.  It was as if the storm had never happened.

Our next stop was Duluth.  The drive along Highway 61 gave us a panoramic view of the City and Lake Superior.  We drove to Canal Park across the iconic Aerial Bridge to watch the float planes land at the tip of the long isthmus.

The grassy sand dunes along the beach there reminded us of North Rustico on Prince Edward Island.

Lake Superior is the coldest, most pristine and youngest of the Great Lakes.  It has the largest surface of any freshwater lake on earth, approximately 31,000 square miles.  It was formed in several stages almost 10,000 years ago.  The striking clarity is due to the low amount of organic material.  It is nutrient poor.  The surrounding forests and rivers filter the water entering the lake which limits the various amounts of biological nutrients needed for algae and other plant growth.  Despite this, the lake supports a healthy ecosystem of plankton, invertebrates and cold water fish.  This powerful inland “sea” masquerading as a lake creates its own weather and climate and its waves continually sculpt the cliffs and reshape the beaches.

We took the Jeep and made our way north along the shore to explore Two Harbors, Silver Bay and Grand Marias.

We hiked Gooseneck Falls and toured Split Rock Lighthouse. The lighthouse was finished in 1908 as a result of a single storm in 1905 which drowned many seamen and damaged 29 ships.

We rationalize enjoying sweet treats we don’t get at home by riding our electric bikes 30-40 miles every time we take them out.  With over 3,000 miles on our odometers, almost anything goes!  After such a ride, we parked in a packed lot along the Stewart River just off Highway 61 under a sign that reads “Betty’s Pies.”  This local institution built in 1958 began as a fish shack.  I opened the door to the diner and was sure I had found pie heaven.  In addition to offering 20 different pies, they will make a custom milk shake by blending the pie of your choice with ice cream and serve it to you in a huge fountain glass.  The waitress set thick slices of pie down on the counter and we dug in with gusto!

Riding our bikes on the Munger Trail to Carlton, as well as traversing the Gami Gitchi trail north of Gooseneck Falls to Split Rock, we got to see forests and coastlines we would not have seen had we stayed in our car.

One of our favorite hikes began in Indian Point by slipping through the trees at sunrise to hike the Waabizheskana trail along the St. Louis River.

We leave Minnesota and head south to explore the Wasatch Mountains in Utah and the changing of the leaves as autumn approaches in Grand Junction, Ouray and Durango in Colorado before turning toward home.