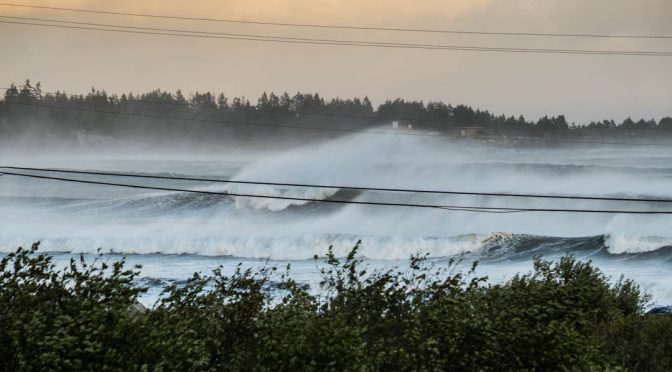 We knew a monster was coming for us.  Nothing could alter its path, stand up to it or stop its appetite for the land and the sea and the air.  Nothing in its path, including us, was safe or would be the same.  It began near the Bahamas and was closing in our hideaway by the sea.  Terry’s video below shows Dorian chewing and whirling and spinning its way by Lockeport,  downgraded to a category 2 hurricane when it hit Halifax.

We got our warning on Friday morning and made our way under a bright blue sky to the local grocer to load our car with a couple cases of drinking water and ingredients for fish chowder, chili and pasta.  Water to the home was fed from a well by a pump that relied on electricity.  We filled both bath tubs with water in case the power failed.  We trudged up to bed.

At 3 a.m. Saturday morning, the howling wind’s frontal attack on the tiny lavender house began.  The 125 year old roof, walls and windows creaked and cracked.  Rain lashed the siding the windows with the intensity of a fire hose.  Water poured in through the tops of the windows and front door.

The next morning we descended the stairs into a kitchen bathed in a dim gloom.  We peered through the picture window and saw row after row of dirty grey waves racing each other to the shore.  The pounding waves seemed to grow in height with each passing moment.  Around lunchtime the old fashion glass dome ceiling lamp flickered and poof was gone.  We would use the water in the tubs to complete the flush of the toilet and the cases of bottled water for drinking and cooking. We were without a landline, modem, internet and cell coverage.  We were alone.

Lockeport is a traditional fishing town, situated on a peninsula in Allendale Bay.  It is connected to the mainland by the Crescent Beach causeway and has about 588 full-time residents.  We were grateful to be stranded in this small community of self-reliant, kind-hearted folks.  We benefited from their kindness as they banded together to be sure everyone, local or not, came through the storm.  Wayne, the fire chief, appeared at our door Saturday afternoon to check on us.  He let us know we could join other folks at the fire hall when there was a brake in the storm.  There we would find electricity for charging the computers and drinking water.

The storm didn’t break until Sunday morning.  At the fire house we learned over 366,000 folks were without power.  The trees, heavy with foliage, were the culprits.  The 125 plus kilometer winds tore 200 year old trees from the ground like toothpicks.  The trees and broken branches fell across power lines taking power polls to the ground.  Word was we might not have power for several days.

We listened as neighbors trading stories comparing this storm to the last big one.  Plans were made for a community barbecue to cook food that would otherwise be lost due to the power outage. Holly, the caretaker for the cottage, surprised us with 5 lbs. of scallops which had defrosted….we shared our treasure with Wayne and Leo, an artist, we met at the fire hall.

On Monday night, around 10 p.m., the kitchen light roared to life.  Modern conveniences returned our life to normal.  We only suffered minor inconveniences.  In Bermuda there was loss of life, structures were destroyed and the devastation is horrific.