We visited the Corvette Museum late in the afternoon and had the 115,000 square feet to ourselves.  The museum opened in 1994 and sits on a 60-acre campus, complete with race track.  Our self-guided tour began with a walk down vignettes depicting Main Street in an American small town.  Early model Corvettes are cleverly displayed against the backdrops of a Photo Shop, Al’s Barber Shop, an assembly line, a Mobil gas station, a car dealership and a repair shop.

Further on the displays get serious with the side-by-side racing, production and one-of-a-kind models from every era since 1953.  Much like an art museum, the hundreds of cars in their inventory are either owned by the museum or on loan from a Corvette enthusiast. 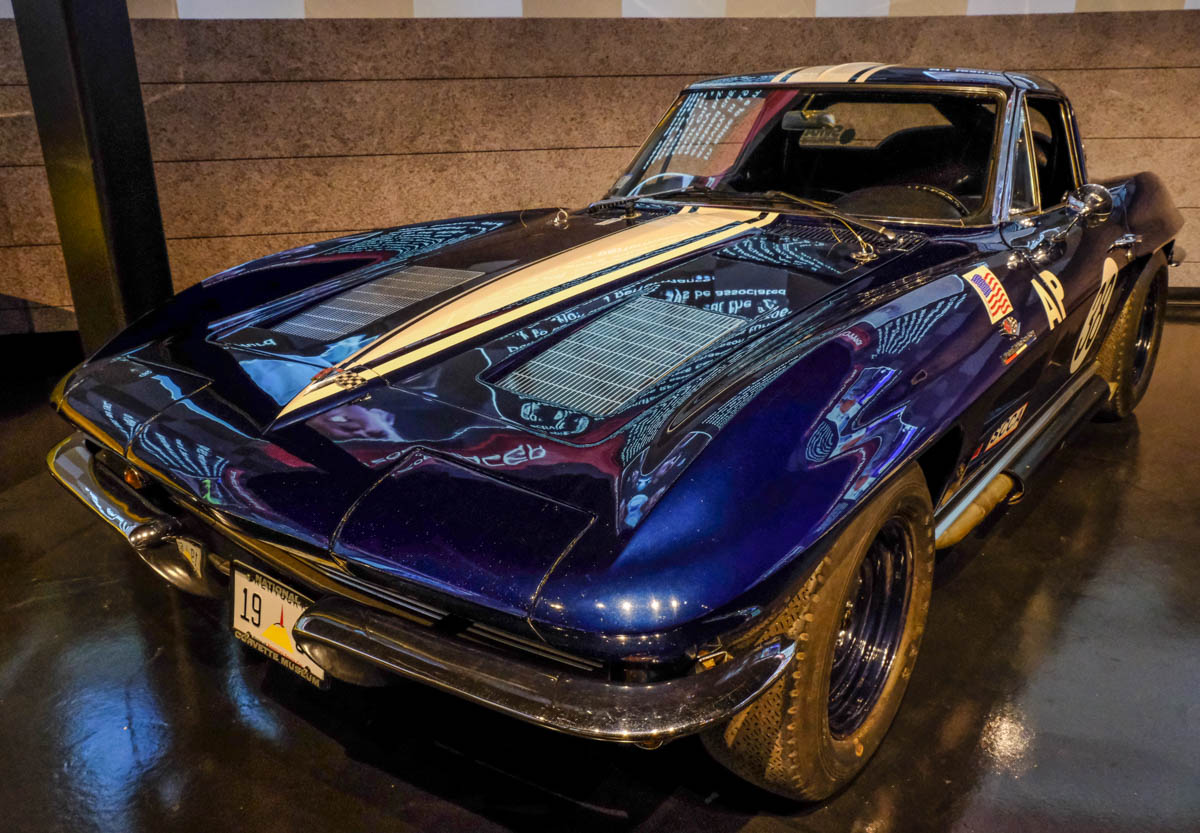 The displays change regularly allowing hundreds of Corvettes to be viewed each year. Overall, the name of the game is speed and the museum is a testament to those who love America’s Sports Car.

The sweeping line of the building’s exterior imitates the car it honors.

Under the canary yellow conical roof of the Skydome is an expansive circular car salon where privately owned Corvettes are exhibited.   Limestone in the Kentucky soil set the stage for a disaster which made international news in 2014.  A thirty-foot deep sinkhole opened below the showroom floor and eight of the prized Corvettes fell into the dark gaping hole.  Beyond repair, some of the crushed frames are on display. 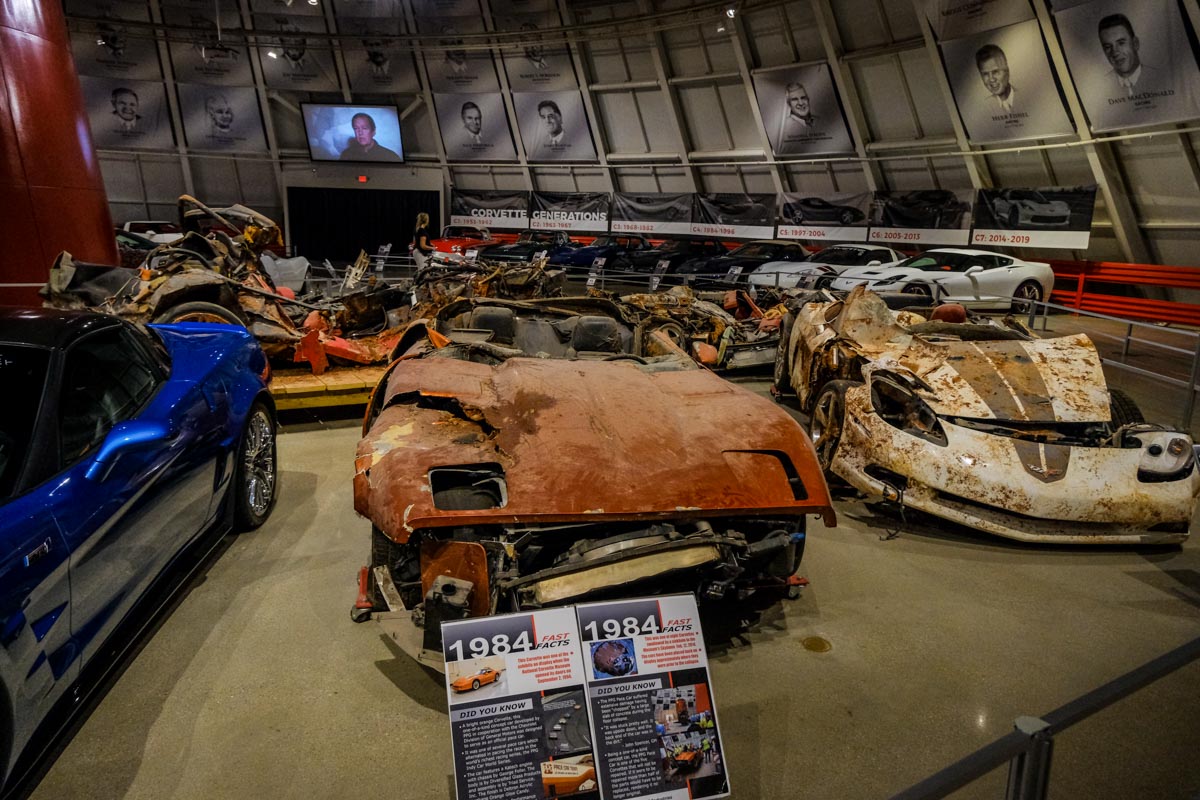 A virtual exhibit recreates the disaster.  Your front row seat shows exactly how the cars fell and how they were crushed when swallowed by the earth.

At a time when America’s automotive industry was lacking, the small-block Chevy V8 engine changed everything.  Rather than try to compete with the Corvette engine, other manufacturers got permission to use the engine. 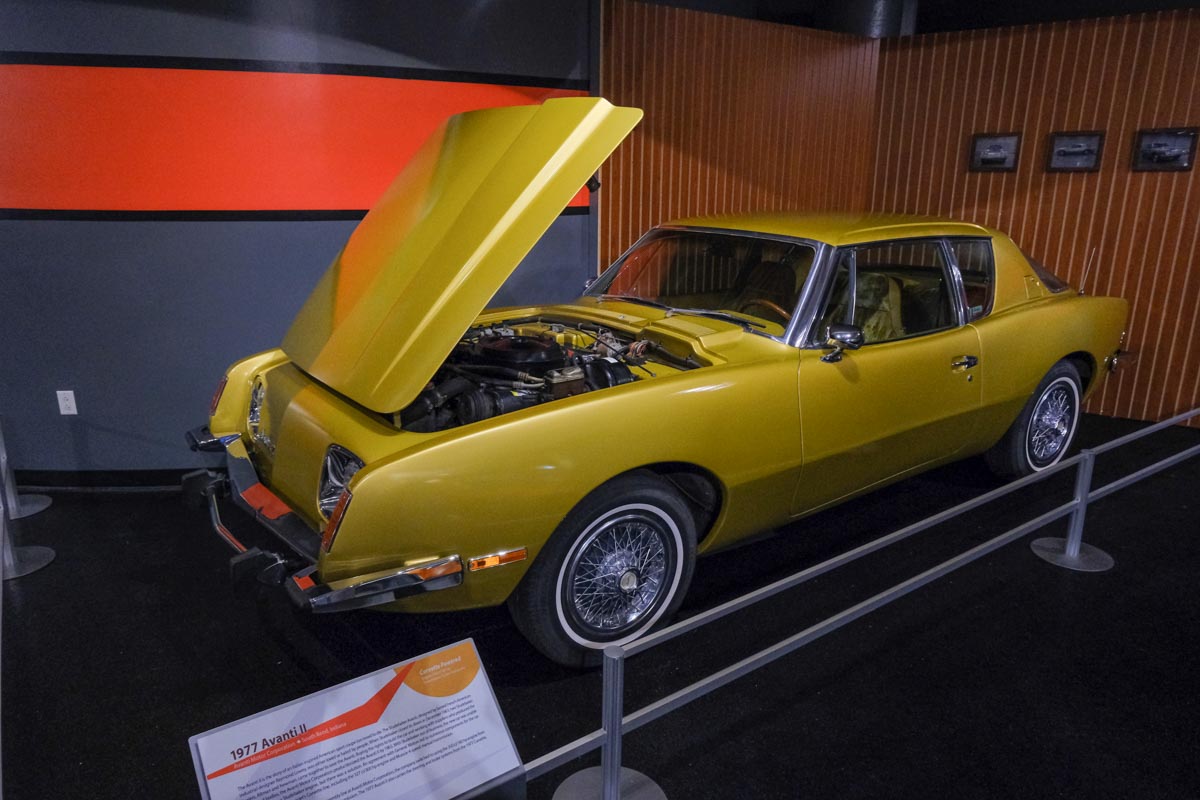 Every car on display, regardless of the manufacturer, has a Corvette engine under the hood including a 1977 Avanti II, a 1966 Excalibur and a custom Chevy by Chip Foose.

The Corvette assemble plant was moved from St. Louis and has been next door to the museum for many years.  In the museum’s lobby, surrounded by red velvet ropes, we found brand spanking new 2022 Corvettes with the plaques naming the new owners who would arrive shortly to claim them.  A 2022 Corvette is delivered with 490 horses.  Imagine, a production model reaching speeds in excess of 187 MPH.   If you want even more you can order the Z06 version with 650 HP.  There is an “E” ticket offered to those who want to push the envelope of speed in one of these sleek machines.  You can climb in, sit behind the wheel, rev the engine and race down the track with a professional co-pilot of course.

Not long after getting his driver’s license Corvette fever struck.  Terry has restored and sold a dozen of the legendary cars.  He meticulously painted each car to glass-like finish.  Orange Peel was the only Corvette built to race.