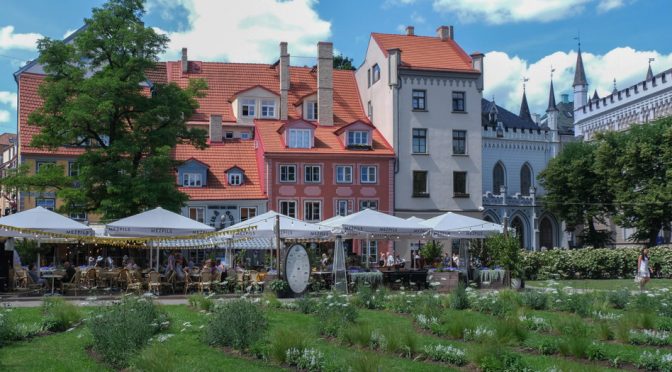 Magic is practiced by our butler Sonu and cabin master Janille.  I’m not sure how they do it.  All I have to do is think of something and Walla! It appears.  I wonder if they can teach Terry how to do that???

We are docked at the mouth of the Daugava River on the shores of Riga Gulf of the Baltic Sea.  Latvia is surrounded by Estonia, Belarus, Lithuania and Russia.  The citizens keep their eyes on Russia, who would like to annex these small countries.  They have only been a free and independent state since the late 90’s.

We will be wandering through Old Town which has been designated as a UNESCO World Heritage Site.  The city has a rich architectural history boasting one of the largest and best preserved Art Nouveau architecture in the world.  I had only seen photos of the buildings.  Those photos don’t do the applied design justice…..the craftsmanship is outstanding.   I’ve not seen so many beautifully decorated buildings in my travels.

We enjoyed our private tour of the National Museum.  The guide stressed the pride felt by the citizens at being a free nation and their ability to showcase Latvian art. The paintings were donated by private citizens who saved the paintings from theft or destruction by hiding them during the war and occupation by Russia.

Janis Rozentals, a Latvian painter 1866-1915, was one of the first painters to utilize a new medium, photography, to paint from images captured by the camera.  He took photographs of his family and painted beautiful paintings of everyday village life.  I’ve included two sections of a large painting “Coming from Church” depicting his grandmother and cousin with her daughter.  I’ve included photographs of several paintings that were our favorites.   Terry employs the same technique over a hundred years later with the new technology allowing him to paint over his photographs.