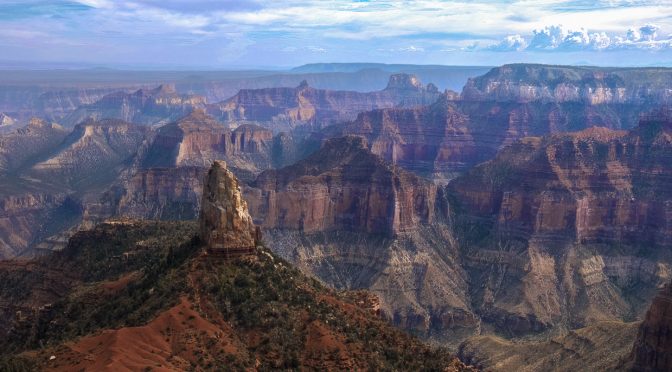 Our thoughts are of home as we drive south from Lake Superior on this last month of our trip.  It will take us four days to travel the 1200 miles to reach our first stop, Heber City, Utah.

Terry discovered his talent as our barista when my brother, Bob and his wife, Anne introduced us to Nespresso.   We installed a custom pull-out shelf under the sink in the coach for the Vertuo so we could enjoy a latte almost every morning.

The inventory of remaining coffee pods would evaporate before we got home .  An an online order was out of the question.  What would you do for your favorite cup?

We checked to see where we could buy more pods. The only place was the Nespresso Boutique at the Mall of America.  After a harrowing drive through a complicated construction zone in the center of St. Paul, MN and a short walk in a light rain, Terry bagged our favorite Voltesso pods.  Ahhh, we are set for one of life’s little comforts each morning!

We drove under a dull grey dome from Minnesota to Utah.  The jet steam pushed the smoke from the fires all the way to the east coast.   In the Heber valley, the Wasatch Mountain Range were erased from view.  Any hopes we had for photography were abandoned.  We filled our days riding our bikes on the paved trails around the meadows and mountains around Park City.

Our luck turned to gold at our next stop.  Grand Junction, Colorado was named for its location at the confluence of The Grand (Colorado) and Gunnison Rivers.

There are two spectacular landscapes: the classic slick rock sandstone of the American Southwest and the Rocky Mountains’ snow-capped peaks.  To the east, the basalt-capped Grand Mesa, the world’s largest flat-topped mountain, looms above the fertile floodplains.  To the north, the tawny Book Cliffs and Mt. Garfield rise above the orchards and vineyards of the Palisades.

To the west, the bent sandstone layers of Colorado National Monument soar above the valley.  The paved bike path along the riverfront connects Fruita to Palisades; a vibrant art community flourishes in the historic downtown and most weekends there are festivals and community activities as well as plenty of seasonal outdoor activities to be enjoyed.

After a week in Grand Junction, we packed up and drove on the Million Dollar Highway through Ouray and Silverton to Durango.  Autumn was in full swing and the mountain sides were covered by thousands of Aspen trees bedecked in their yellow autumn leaves.  Our camp in Durango was right next to the train tracks for the famous Silverton Train.  Twice daily the steam engine would chug its way past our campsite on its way to Silverton.  We biked the Riverside Park Trail  along the Animus River to the north end of the city.  If you are ever in Durango, don’t miss amazing fresh fish and sushi at Eulos.

We went “off road” and four-wheeled up to the Red Mountain Mining Area just above Silverton.  The loop took us to the Yankee Girl Mine and the National Bell Mine, both defunct and abandoned.  There are no guard rails on the narrow dirt tract.

We caught our breath at the Red Mountain Pass, an elevation over 11,000 feet on County Road 31.

We discovered a whole new way of travel that is a bit unnerving but exhilarating.

Our next stop was the North Rim of the Grand Canyon.  We had never been there and found it to be the crown jewel of landscape photography.  On our first day, just before sunset, we visited the lodge and walked from the terrace on a paved path to photograph Bright Angel Point.

We stood at the railing of the lookout jutting out over the canyon and stared in wonder at the dramatic views into Roaring Springs and Bright Angel Canyons.

Just after sunset the canyon fills with a rosy alpine glow that is hard to describe.   We returned to the park the next day to drive through the colorful landscape to the lookouts at Angel’s Window, Cape Royal, Vista Encantada, Roosevelt Point and Walhalla Point.

I need as much beauty sleep as I can get…so getting up at at 4:00 a.m. to photograph Imperial Point at sunrise wasn’t going to be an option.  So we booked a cabin at the lodge to enable us to sleep until 5:30.  We drove a stressful 40 minutes in the pitch black scanning the narrow road for wildlife.  We didn’t want the surprise of Bambi springing onto the road.  The sky was just beginning to brighten as we parked at the lookout.  It was a short hike to the point.  We watched the sun rays reveal the expanse of the canyon inch by inch.  The colorful layers etched into the cliffs changed colors every ten minutes.  The drama of this morning ritual has been repeating itself for thousands of years.  No two mornings are the same.  We plan to return at different times of the year to experience the serenity and magic once again.

Our last stop at the end of September was Pinetop, AZ.  Our friends, Anne and Jim,  took us on a guided tour of their beloved White Mountains.

The weather was turning cold and we got a dusting of snow when we went off road near Big Lake!

We are home now putting together this post.  We have just sold the coach.  And that my friends is another story.  We will continue to travel and record our adventures, just not on six wheels……..until next time.