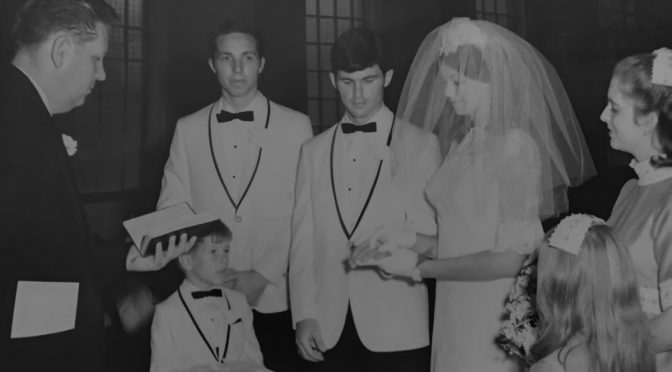 We have been traveling in rural Kentucky for almost a month.  The narrow two-lane roads slice ribbons of grey through miles and miles of brilliant green corn fields.  Wildflowers bend and sway on tall whisper thin stalks.   The densely forested hillsides have been a welcome relief from the desert landscape at home.

We are headed to London, Kentucky to visit John and Darlys Warren.  Terry has known John since they were in the Army together at Fort Hood, Texas.

On May 31, 1969 John and Darlys were married in Pineville, Kentucky.  Terry was best man.

A terrible flood almost washed Pineville away in April, 1977.  All of their family photos including those from the wedding were lost.  Darlys’ mom was able to save the three  that appear in our story.

John and Darlys picked us up at Levi Jackson State Park to take us home for a dinner of Southern specialties.  The feast included her signature chicken and dumplings, sweet potatoes sticky with honey, coleslaw and green beans from the garden.  Desert was our choice of homemade Kentucky Mud Pie or pound cake smothered with fresh strawberries and topped with whipped cream.

We swore we wouldn’t eat for days, but we found ourselves eating again late the next morning.  Great southern cooks set bountiful tables and Darlys is no exception.  Her dishes included eggs any style, biscuits and gravy, spicy sausage, bacon, fried potatoes with onions and strawberry freezer jam!

John drove as Darlys narrated the history of their beloved Kentucky.  Our travels included the Kentucky Horse Park in Lexington where we met a 50 Million Dollar horse named Point Given.  In the Distillery District we enjoyed  ice cream at Crank & Boom.

Darlys made arrangements for us to visit Keeneland Racetrack whose beautiful grounds rival Churchill Downs.

We  climbed the stone steps at the Laurel Cove Amphitheater. The Kentucky Mountain Laurel Festival has been held there on Memorial Day weekend every year since 1931.  The Laurel trees surrounding the amphitheater are in full bloom.  Candidates representing their colleges and universities from all over Kentucky attend.  A queen is crowned by the governor at the coronation ceremony on the last day.

We stepped across the state line between Kentucky and Virginia on our climb to the Pinnacle Overlook.  We had lunch at the near by Herndon J. Evans Lodge at the Pine Mountain State Resort.  It’s reminiscent of a snow lodge or a hunting lodge.  The upper lobby of the lodge was built in the 1930’s and showcases the beauty and workmanship of the original sandstone and chestnut log construction.  Framed art prints by Ray Harm depicting animals and birds native to this area are found on the walls throughout the lodge. 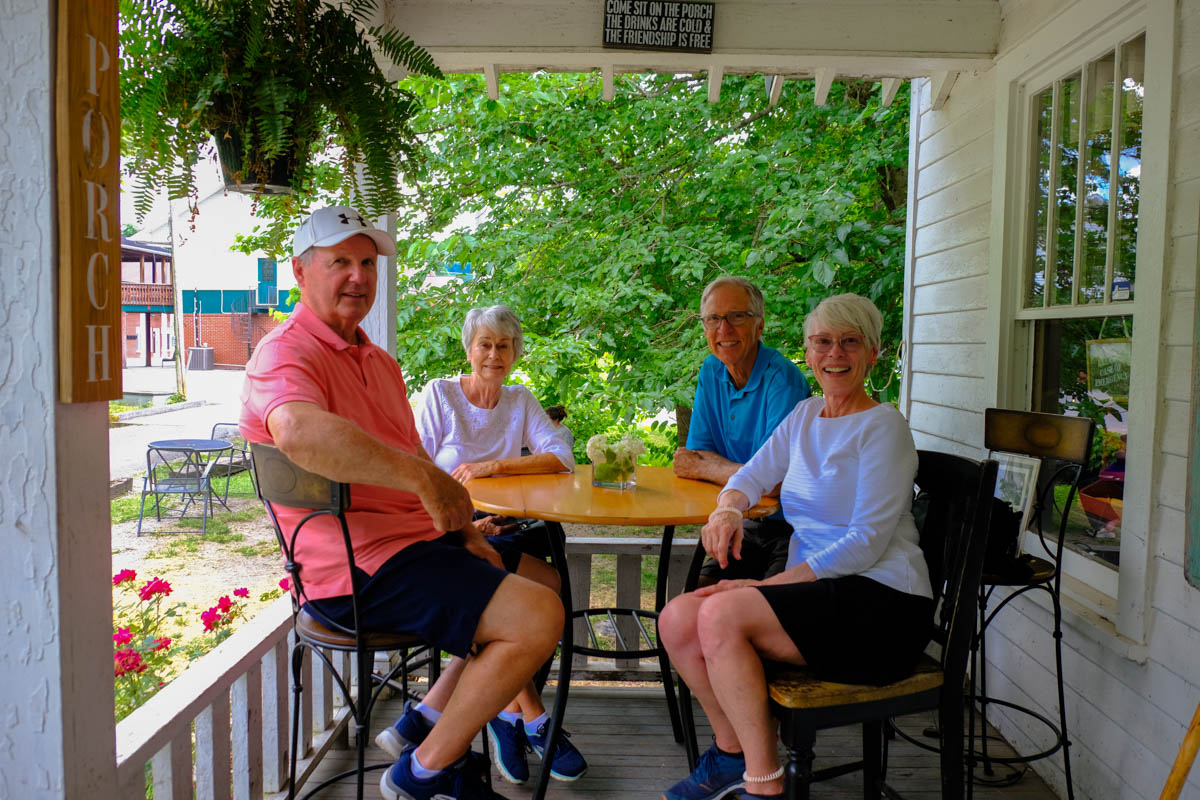 We finished the day on “The Porch” with a coffee and pastry in the city of Cumberland at the base of the Cumberland Gap.   The “Gap” was long used by Native American nations as the only way through the continuous Cumberland Mountain ridge line.  In 1750 a team of frontiersmen led by Daniel Boone marked the first time the Gap was used by pioneers to journey into the western frontiers of Kentucky, Virginia and Tennessee.

We were delighted to share John’s Father’s Day celebration barbecue with his children and grandchildren.  The Warren clan is large boisterous and utterly charming.  Our visit with them was the highlight of Kentucky. Thank you Darlys and John for opening your home and hearts to us!