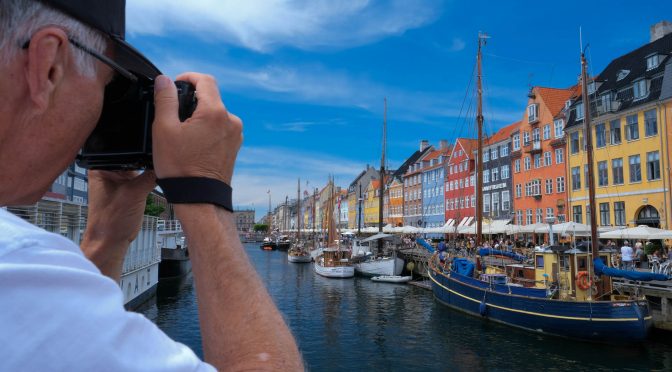 I pulled a fast one.  Generally I follow the rules, this morning I decided to break a big one.

There are over two thousand guests disembarking from two ships this morning Copenhagen. From our balcony I see there are a limited number of taxis to the city and airport.   We were told we may have to wait up to two hours for transportation after our cabin number was called to disembark.  I good at relaxing; I’m not good at waiting.  I have a plan I don’t reveal to Terry.  I have him follow me downstairs to the crew deck at 7:30 and act like we belong there.  They lower the gang plank; we walk down, retrieve our luggage and are in the back of a taxi in a matter of minutes.

We arrive at our hotel a little after 8 a.m.  The plan was to store our luggage and explore the city.  Eden, a tall, brunette Danish beauty greets us from behind the reception desk.  She has a surprise for us….our room is ready and we can go up.  Yippee!!  The luggage is rolled into our room, the twenty pound plus camera backs are peeled off and we sit down.  Then we lie down.  We agree a nap is in order….the sun doesn’t set until almost 11 p.m. so we have plenty of time to explore this city of Hans Christian Anderson and the Little Mermaid.

We are up at noon and out on the street.  Most everyone rides bicycles.  We learned later Danes would prefer to drive a car, however the tax structure in their socialist government dictates if you buy a car for $30K, you pay a matching amount of $30K in tax.  Yikes!  On the bright side, they enjoy great cardio biking to work and school.  We watched the bikers and changed our minds about renting bicycles.  Bike riding here is a sport; a little like bull fighting, the riders don’t necessarily follow the traffic signals and the pedestrians cross at their own peril dodging the bicyclists. You can walk, bike or cruise through this city.  We choose to walk…we just had to watch out for the piles of cobblestones that line the curbs.  Construction is limited to the summer and the repair or modernize throughout the city is everywhere.   The Dane city planners were the first to experiment with pedestrian streets lined with shops, restaurants and outdoor cafes.  Many were skeptical, but the popularity and success of “traffic free” streets has led to many such streets being established throughout the world.

In 1856, the ramparts which encircled the city for almost seven centuries were pulled down.  The capital expanded incorporating many of the adjacent districts to become the largest city in Denmark.  We strolled through colorful picture perfect 17th Century townhomes in the sailor’s quarter along Nyhavn Canal.  This may be the most photographed canal in all of Europe where historic wooden ships line the waterfront.  At the end of a cobblestone street we found Frederik’s Church, more commonly known as The Marble Church. 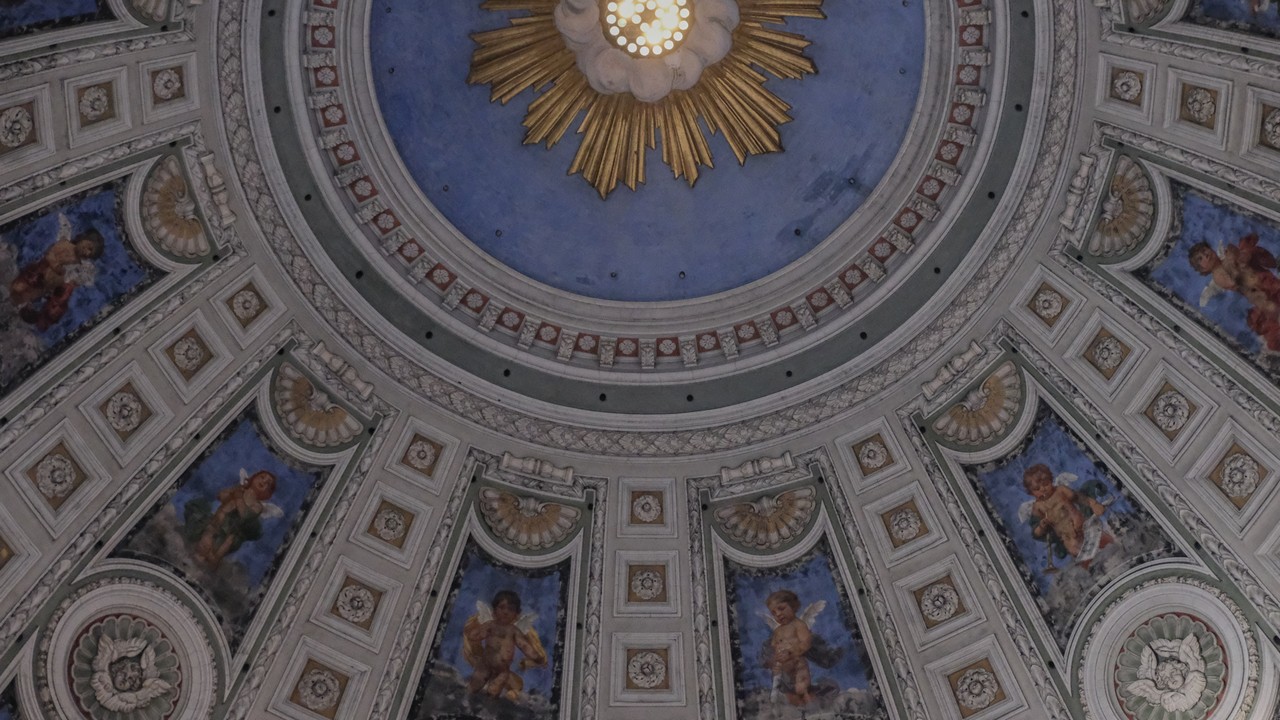 Shortly after construction began in 1740 funds ran dry.  It stood in ruins for 150 years and didn’t open for worship until 1894.  Except for the limestone door spanning 31 meters all other surfaces are marble.

We watched the changing of the guard at Amalienborg Palace built in 1760 and home of the Danish Royal Family.  The guards looked sharp in their uniforms but not as serious as the guards at Buckingham. From there we visited Rundetaarn, or the Round Tower.

To reach the observation platform we climbed the central spiral corridor paved with orange bricks.  This 17th Century astronomical observatory feels like a cathedral with its soft white walls and Roman barrel vault ceilings. Our reward was a panoramic view of the city.  In the winter months the platform is used to watch the stars making it the oldest functioning observatory in Europe.

Knowing we couldn’t possibly see everything in our short time in Copenhagen, we slowed down after walking through the rush of commuters at the train station to sit on a bench in the shade of an ancient oak in the Royal Garden to people watch.  The main attraction here is Rosenborg Castle.   This Dutch Renaissance style castle is surrounded on three sides by a moat and was originally built as a summerhouse in 1606.  Sun bathing is a national past time during the lunch hour in the summer.  The green lawns of the castle are dotted with sun worshipers and picnicking families.

Sleek glass and steel modern architecture in the industrial area sit together with the old brick townhouses.  Two of the best examples of modern Danish architecture The Royal Danish Library known as The Black Diamond and the Opera House. 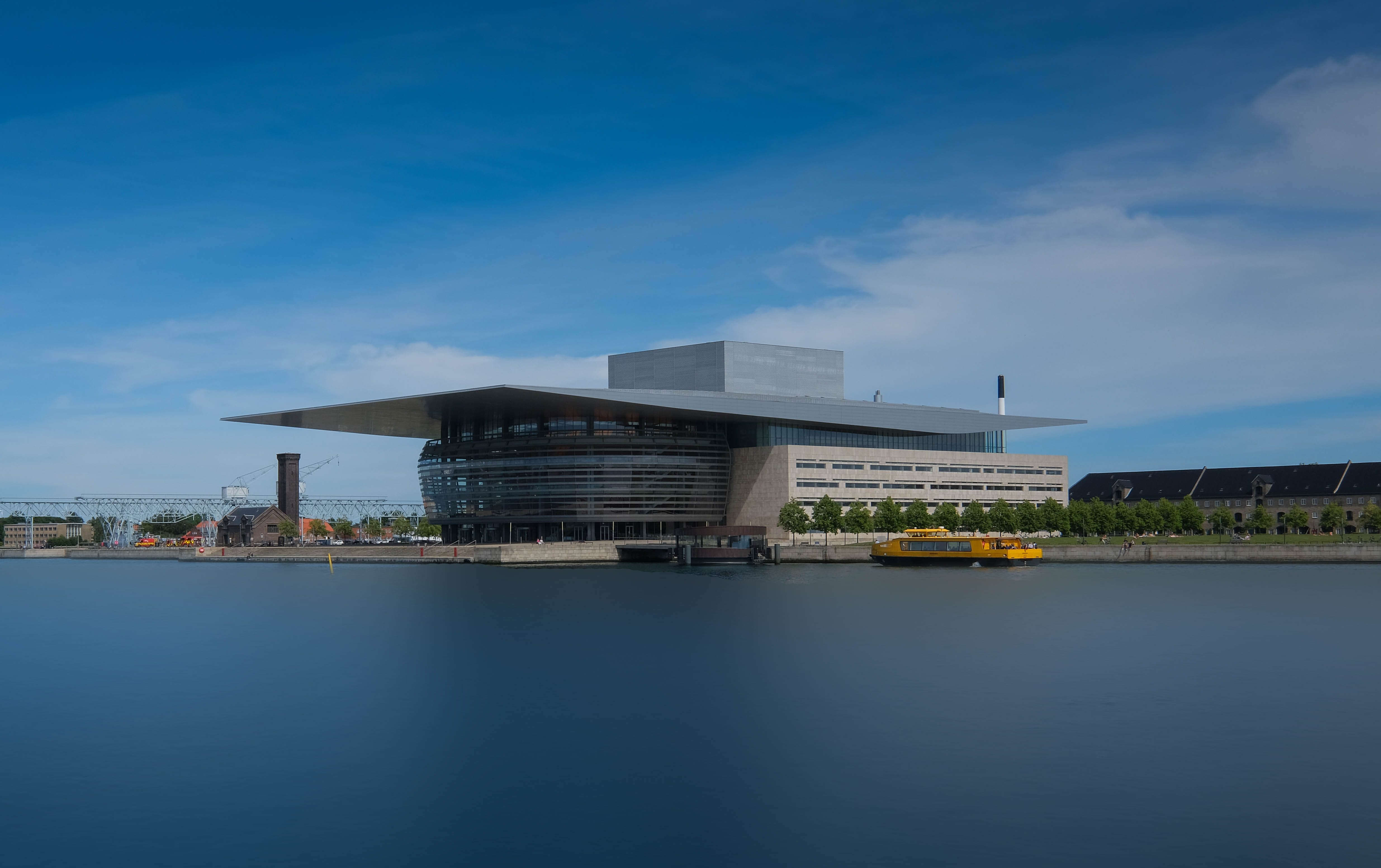 At The Black Diamond I found a kindred spirit in photographer Keld Helmer-Petersen who began the abstract movement in photography in the 1930’s.

On our last evening, we took our cameras into the streets crowded with others enjoying the last warmth of the setting sun to capture the uniquely lit buildings in the city center.  At home we would have long been in our jammies reading or working on the computer.   We think about getting up early to catch a flight to Iceland for our photographic workshop and wonder, do they have Geritol in Iceland?