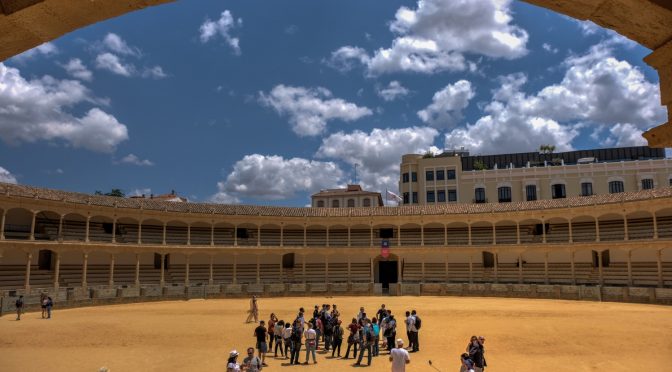 The tour bus engine growls into life and we make our ascent up the mountain.  My window frames a series of undulating hillsides as we race past.  There are fields covered in row upon row of trailing grape vines.  We continue to climb twisting and turning.  The vines have given way to acres of neatly planted rows of dwarf olive trees alternating as far as the eye can see with fields of golden wheat.  These squares of wheat disappears atop the hill where the horizon meets the blue sky.   The strong wind is pushing thousands of stalks.  They swivel and bend creating endless waves looking for a shore to crash upon.

In the area surrounding Ronda remains of prehistoric settlements dated to the Neolithic Age have been found.   It was settled by the early Celts in the sixth century BC.  Phoenicians followed them and then came the Romans.  The Guadalevin River runs through the bisected city.   The city’s buildings are perched on the edges of a 300 foot deep canyon, El Tajo.  The most impressive of the ancient bridges, Punete Arabe, connects the two sides.

Built in 1784, The Plaza de toros de Ronda, is Spain’s oldest bullfighting ring.  Ernest Hemingway and Orson Wells spent many summers in Ronda.  Each wrote about the beauty and famous bullfighting traditions.  “For Whom the Bell Tolls” describes the execution of Nationalist sympathizers early in the Spanish Civil War. In his novel, they were thrown from the cliffs in an Andalusian village.  Allegedly Hemingway based the account on actual killings that took place in Ronda at the cliffs at El Tajo.  I was surprised to learn upon Orson Wells’ death in 1984, his ashes were buried in a well on the rural property of his good friend, a retired bull fighter.

I also learned that the bulls raised to fight in the bullring are not domesticated.  The bulls are born in the wild on rural farms.