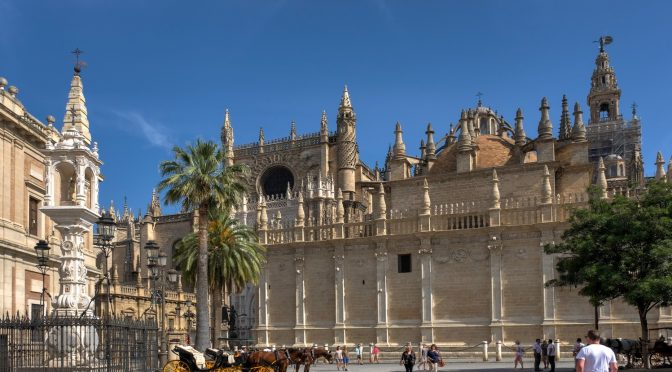 If it’s Thursday, it must be Seville!

How can one complain about being on the go everyday when you wake to the news you are in another incredible European City??  Well, it does get a little harder if you are over 65.  The brain says yes, the body would like to sleep in.

We board another luxurious coach and head for Seville,  the capital and largest city of Andalusia.  Here’s the secret of riding in a coach….head immediately for the back.  It is elevated and you get to see both sides at once.  No one else wants the back.  They fight for the front seat and then have to stand in line to exit….we sit in the “cat bird seat” and slip out the door in the middle.

The ocher colored houses radiate the energy and warmth of the people.  We are in the midst of a passionate people.  Seville is known for bullfights, Bizet’s Carmen, Flamenco clubs, lively neighborhood bars, tapas and Cruzcampo beer.  Spellbindingly beautiful Mudejar architecture  sits adjacent to ultra modern structures stitched together by narrow alleyways that host wrought-iron gated courtyards shades by orange trees contributing to the feeling that you have just stepped back in time.

We opt for a carriage ride through Parue de Maria Luisa, a half mile of palms and orange trees, elms and Mediterranean pines.  We glimpse hidden bowers, ponds and pavilions.  The shade a is a welcome relief from the 98 degree temperatures.

In 1929 Seville hosted an expo that was over twenty years in the planning.  Plaza de Espana is the centerpiece of the expo focused on Latin-American countries.  23 countries took part which each building its own pavilion.

Next we walked the entire circumference of of the 16th century Seville Cathedral.  Not on purpose, we were looking for the front door and with the scaffolding and repair of the bell tower we took a wrong turn.  It is monstrously big…supplanting Hagia Sophia which held her title as the largest cathedral in the world for over a thousand years!   A mosque was originally built on  this site in 1172 .  In 1401 the city leaders decided to build a new cathedral to replace the grand mosque. In 1987 it was registered as a World Heritage site by UNESCO.

Inside there is a elegant monument built to house the remains of Christopher Columbus.  I didn’t know his body was moved several times after his death.  He asked to be buried in the Americas, but no church of sufficient stature existed there.  His body was buried in Valladolid in 1506.  Then moved to a monastery on La Cartuja in 1537.  In 1795 when Spain ceded Hispaniola to France and it was decided that his remains should not fall into the hands of foreigners.  Off he was taken to Havana, Cuba and then back to Seville in 1898 at the onset of the Spanish-American War

Then in 1877 a box was discovered in Santo Domingo cathedral identifying it as don Christobal Colon the Spanish way of saying Christopher Columbus.  The Dominicans say these are genuine and the Spaniards took the wrong body back in 1795.  They are actually in the midst of a second DNA test to determine who is in which box.

We walk to Plaza de Toros de la Maestranza, built in 1762.   It is silent today.   When occupied, the crowds are regularly on their feet at the corrida.  They can can be heard from the street.   Immortalized in Bizet’s Carmen it accommodates 14,000 and the acoustics allow you to hear everything wherever you sit.

Toreros, Juan Belmonte and Joselito El Gallo each faced the magnificent wild, black creatures at the tender age of 14.  It is reported Rita Hayward (born Margarita Carmen Dolores Cansino, her father was Sevillano) attended a bullfight in 1960 with her second husband, Orson Welles.

If you want to stay in Seville and see how the other half lives,  then the Hotel Alfonso is for you.  Kings, Queens, Movie Stars and you too can enjoy every luxury imaginable wrapped in old world first class style.