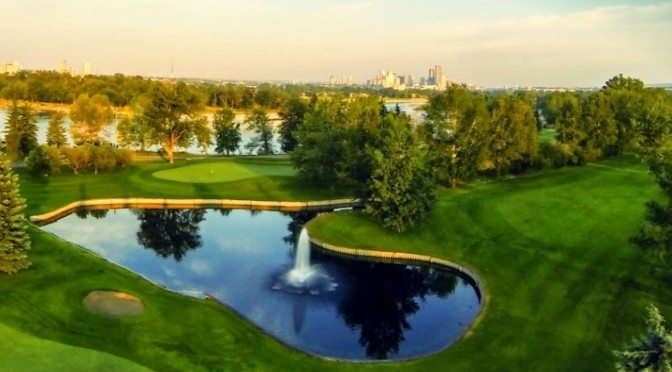 Inglewood Golf and Curling Club has been around for awhile.  It sits by the bird sanctuary in the middle of the city on the banks of the Bow River in Inglewood, Alberta.   In 2013 the entire course was under water from a flood.

There are a lot of trees and there’s an eagle that lives in one of the tall elms at the fifth hole.

Unfortunately, I have never made it past the first nine holes.  On the 9th hole I was greeted with thunder and lighting.  The two Canadians I was playing with worked as starters for the course.  They put on their rain gear and proceeded down the 10th.  They told me to ask the pro shop about a rain-check and I did, they complied.  I wasn’t even 10 minutes away when the sky cleared and the sun was out.

The day I played it was 55 degrees Fahrenheit, cold and windy.  The greens were cut close and rolled fast.  I may not be the best putter, but when you are 10 feet from the pin and draw the putter back 1/4 of and inch and end up 8 feet on the other side, I’d say that’s fast enough to increase your index by a couple of stokes.  Did I mention trees?  The fairways are narrow tree lined  and as wide as a bike path.  If you’re not in the middle your second shot will be interesting to say the very least.  The best you can hope for is a boogie. Needless to say, I was enjoying the forest most of the morning.    Maybe I should have gone Curling there instead, I probably would have done better.

Curling is described as a sport in which players slide stones on a sheet of ice towards the target area.  That sounds like they’re describing putting on their greens.