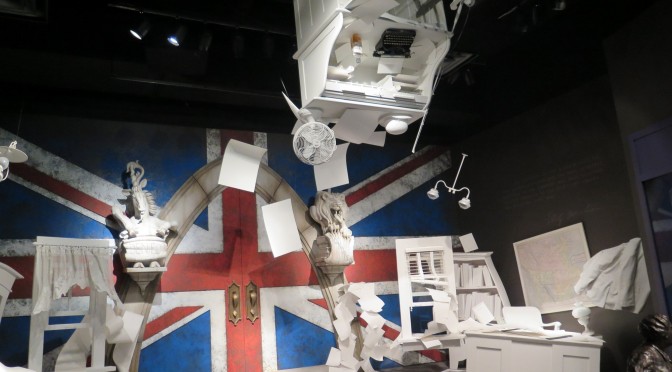 The Glenbow Museum began with the remarkable vision of petroleum entrepreneur and lawyer Eric Lafferty Harvie. who came into his fortune when oil was discovered on his land 1947.

With this prosperity, he decided to pursue his favorite passion — collecting — and simultaneously return some of his good fortune back to the region that had been so generous to him. Mr. Harvie’s goal was to collect the objects representing the history and culture of Western Canada as well as from around the world.  In addition to The Glenbow Harvie provided support for the creation of  the Banff School of Fine Arts, the Luxton Museum, the Calgary Zoo, Heritage Park, and Confederation Square and Arts Complex in Charlottetown, P.E.I. To continue the legacy, the Devonian Foundation was created, and was run by his son, Donald Harvie.

In addition to the permanent exhibitions we viewed “Gun Sculpture” and unsettling cube the size of a small bedroom made entirely out of guns, rifles, bullets, bayonets, helmets…all fashioned together in surprising beautiful patterns.  To complete the exhibit, the artists Bromley and Kendal posted photos of victims of gun deaths resulting from international ways and conflicts.  Very powerful.

On the lighter side was an exhibit of political cartoons….not much has changed since pencil touched paper….the cartoons from the last century are relevant today.

John Brooke’s textural paintings upon close inspection looked as if he was painting with iridescent silk fibers.  when you walked in front of them, they glistened and changed colors.