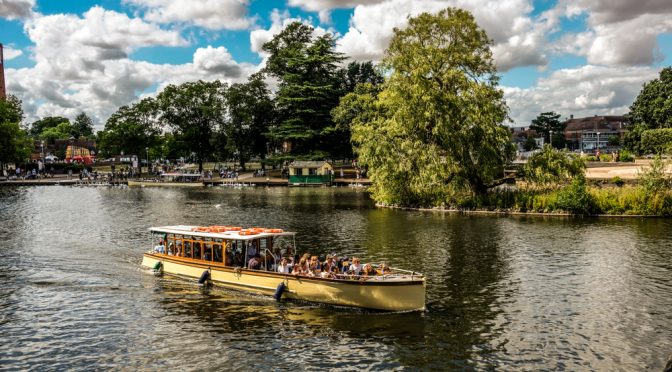 I’m sorry to admit I don’t get Shakespeare. I had to read his works in high school and college.  I liked the movie adaptations better. His written word is hard for me to understand. Perhaps I just wasn’t interested in spending the time to understand. I didn’t want to pass up the opportunity to visit Stratford upon Avon in the hopes of being there would get me in the groove.  So I planned an overnight in the village of his birth.

Remember those folks we told you about in Florence and Rome?  Well, they made their way to the shores of the River Avon.  Over 2.5 million visit each year.  With a Ferris wheel on the river, Stratford is a bit like a theme park.  We did what they did…walked the towne centre to see Anne’s cottage, the theater and William’s birthplace.  I had my heart set on a boat ride but hundreds were queuing up at the dock, I was ready to throw in the towel.  Terry, smarter than the average bear, walked us over the bridge and we boarded a boat without any lines.

You can choose to row a boat, steer a little outboard motorboat or ride in style on a 40 foot long covered cruiser.  We took the luxury option of the cruiser and sat in the back.  You get a great tour of the posh properties with rolling green lawns and beautifully manicured gardens. 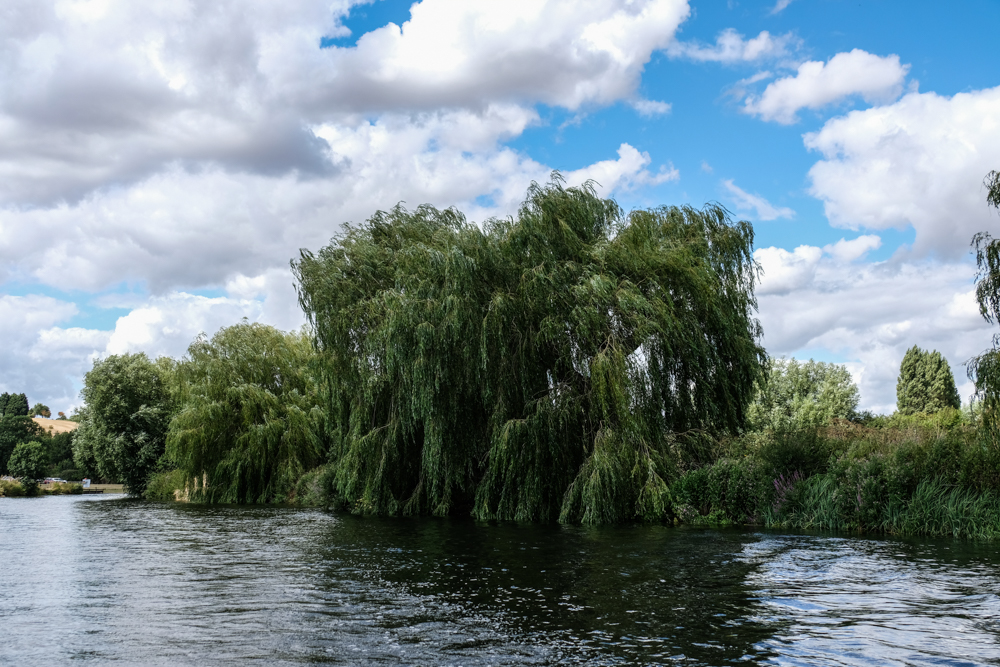 There are magnificent weeping willow trees whose branches skim the water’s surface.  The trees create little private pockets where the romantics sit side by side peeking out as we pass.

The real entertainment is watching folks row their boats.  It didn’t matter if it was a man or woman, young or old, muscle bound or not….not many could go in a straight line.  Synchronizing the oars seemed impossible and many rowed in circles.  Gales of laughter could be heard up and down the river.  Those pulling the oars weren’t laughing quite as loud.   It’s harder than it looks.  A little orange zodiac was busy cruising up and down the river collecting wayward rowers and pulling them back to shore.

Sheep Street is restaurant row.  We were dining on fresh fish and grilled halooumi cheese at The Lambs www.lamsrestaurant.co.uk when we met some locals who were entertaining family from New Zealand.  This turned out to be the highlight of our stay.  They sorted out just what villages to see while in the Cotswold area.  So many beautiful villages and so little time.  We decided to be up early the next morning, stopping at Stow on the Wold, Lower Slaughter, Bourton on the Water and Chipping Camden on our way to Wheatley.

Stow on the Wold proved to be as lovely as its pictures.  We roamed the market square, picked up some local cheese and apples to have a picnic in the park.  We shared a bench with a young Chinese woman who was on holiday from her studies to become a criminal lawyer in Oslo.  From there we went to Lower Slaughter, voted the most beautiful village in Cotswold.  It is picture perfect and deserves the title.

We stopped for a coffee on the lawn of a local inn before walking up to the main attraction…. The Old Mill on the River Eye.  Terry turned the corner of the lane and stopped in his tracks.  He recognized the Mill.  38 years ago he took a photograph on this very spot.  Many years later, he used that photograph as the first image when he taught himself to turn photographs into paintings.  Only three things have changed in all that time; the tree was taller, the wheel no longer turned and he has a lower handicap.

We made our way to Bourton on the Water and kept on driving through and out of town.  We couldn’t see the grass lawn at the river’s edge for the brightly colored blankets and beach chairs.  Hundreds of tourtists were beating the heat in the shade of the giant oak trees.

We made our way to Chipping Campden.  Large sandstone homes with thatch roof homes lined the road into towne centre.  I heave a sigh of relief, not a tour bus in sight. Chipping Champden Market Hall built in 1627 stands on High Street in the center of town surrounded by honey-coloured limestone buildings.  The stone is quarried locally.

The marketplace is known for its splendid wooden arches.  Yes, you guessed it.  Terry was here and nothing has changed.  The town will be busy during the Olimpicks held every year in late May.  This annual championship of rural games has been held since the early 17th century.  There is horse racing, coursing with hounds, running, jumping, dancing, sledgehammer throwing, fighting with swords and cudgels, quarterstaff and wrestling.   Thank goodness we are here in late July.  It is an ideal place to spend time before we made our way to Wheatley, just outside of Oxford, where we will be staying for a week.

In case you were wondering, like we were, what made up the names of villages, here is a sampling:

STOW
The word “stow” or “stowe” found in several place names including “Stow-on-the-Wold” and Walthamstow, simply means “place of assembly”.

CHIPPING
The word as used in the names of various places found in the Cotswolds like Chipping Norton and Chipping Campden. Chipping comes from the word ‘cheapen’ which is the medieval word for ‘market’.

SLAUGHTERS
Comes from the medieval term used to describe a marshy muddy area of land.