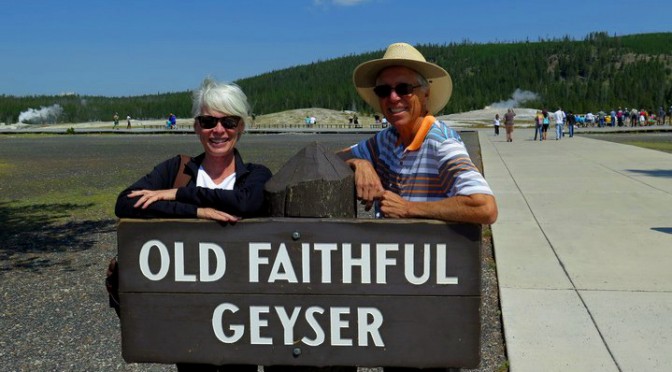 Yellowstone was established by Ulysses S. Grant on March 1, 1872 as our first national park. My first and last visit was In August, 1959.

My father had reserved a cabin near Old Faithful. Walls of rough rounded beams stacked on each other separated by cement mortar enclosed a 20’x20’ space that was to be our wooden tent for a week. Cement steps led to the green plank door guarded by one small opaque window; canvas cots and a small sink in the corner were our luxuries, there was no bath.

At 11:37 p.m. the cabin was shaken violently from its foundation. The earthquake measured 7.3. We were the lucky ones. Over 90 million tons of debris crashed down a hillside causing over $11 million in damage ($80 million in today’s dollars) and killing 28 people. Many families made an immediate run for the gates. My father, after talking to the park ranger, decided that it was safer for us to stay put.

When we did leave we were astonished at the changes to the park; new geysers sprayed water into the air where just yesterday there were none; buildings had moved from their foundations, doorways no longer lined up with the concrete porch steps; many fault scarps appeared throughout the park their sides moved vertically as high as 10 feet; jagged lines tore some asphalt roadways apart leaving new ravines deep enough to swallow a car.

Fast forward to 2015, we decide to drive to Yellowstone via Grand Teton National Park, and make the circle of its interior. We didn’t realize that it would take us 9 hours.  Terry, the best animal spotter you could take on a vacation, yelled, “Grizzly” and I captured the highlight of the day.  Humped shoulders, shaggy brown coat and huge, the bear was sauntering through a meadow.  Folks stopped mid road to hop out to take photos…several were following him through the grass…can’t fix stupid.  This bears could turn and run close to 30 MPH.

There are bear attack warnings throughout both parks. And you can rent bear spray….just know how to use it and not spray yourself in the face. Quite honestly, if I had been attacked by a bear, I’m not sure if I would have had the presence of mind to do what they advise….first don’t run, second stand still and if the bear gets close enough use the spray correctly, lastly if attacked, fall down lay on your stomach and pretend you are dead….I’ve of a mind that if attacked…you will be dead. We saw a stuffed grizzly….claws on that big boy were at least 4” long!!!!

We began at Old Faithful….still faithful every 94 minutes….the geyser blew at 1:54 p.m. with hundreds watching. In 1882, General Sheridan’s men experimented with their linen and cotton fabrics by throwing them into the crater. The fabrics were ejected, thoroughly washed when the eruption took place.

If you haven’t been, get your senior pass…good at all national parks for your lifetime and GO….just be sure not to hike alone, don’t approach wildlife, wear good hiking boots, bring your bike (or rent), take water and wear a hat.