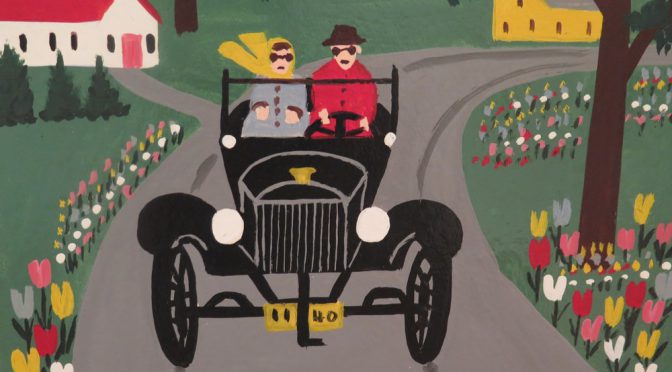 We became enchanted with the life and folk art of Maud Lewis while visiting the Art Museum of Nova Scotia in Halifax.   Here was a woman who never traveled outside two counties in her native Nova Scotia.   Yet, her art speaks to everyone. The bright contrast of colors and simple subject matters lifted our hearts.

Maud Lewis (1903-1970) was born to John and Agnes Dowley on the Yarmouth and Acadian Shore of Nova Scotia. Although there is some debate about her exact birth place, recent research has revealed that Maud was born in the town of Yarmouth, NS. As a child, Maud spent most of her time alone, mostly because she felt uncomfortable about her differences around the other children. She had been born with almost no chin and was always much smaller than everyone else. However, Maud seemed to be a happy child who enjoyed the time she spent with her parents and brother. Maud’s mother started her painting Christmas cards to sell and thus her career as an artist began.

Her life and only experience of the world extended to an area between her birthplace in Yarmouth County and her married home in Marshalltown, Digby County. In 1935 Maud’s father died and in 1937, her mother followed. As was typical at the time, her brother inherited the family home. After living with her brother for a short while she moved to Digby to live with her aunt. There she met Everett Lewis, an itinerant fish peddler and married him shortly after in 1938.

Maud soon began to paint in the style of her Christmas cards on the interior and exterior surfaces of her home.  At first folks stopped at their little roadside home to enjoy the painted surfaces.  Then they began stopping to purchase  her paintings.   Years after the deaths of Maud and Everette, to protect and preserve the little home, the museum moved their little painted home, less than 900 square feet (no water or electricity) to a permanent exhibition on site.  I could only marvel how they could have lived in such a small space through harsh winters.