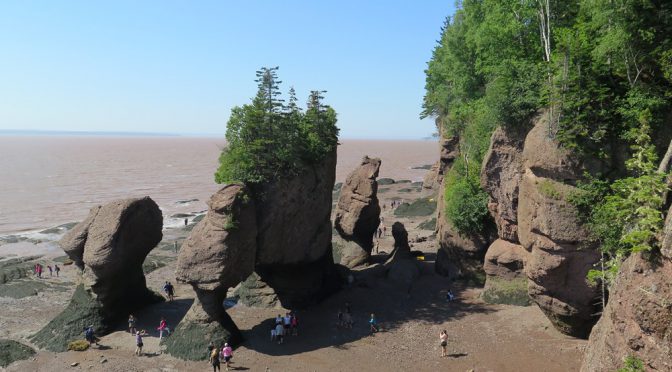 We left Shediac early in the morning traveling to the Bay of Fundy to walk the ocean floor surrounding the Hopewell Rocks. You need to follow the tide schedules to be sure to get there when there is a window between high and low tide.  The tide recedes almost 39 feet to expose the ocean floor….no where else on earth can you walk on the ocean floor twice a day.

The formations consist of dark sedimentary conglomerate and sandstone rock. The large volume of water flowing in to and out of the Bay of Fundy modifies the landscape surrounding it. After the retreat of the glaciers in the region following the last ice age, surface water filtering through cracks in the cliff has eroded and separated the formations from the rest of the cliff face. Meanwhile, advancing and retreating tides and the associated waves have eroded the base of the rocks at a faster rate than the tops, resulting in their unusual shapes.

On March 14, 2016, a part of one of the Hopewell Rocks, Elephant Rock, collapsed. Park officials said approximately 100 to 200 tonnes of rock fell to the ground.