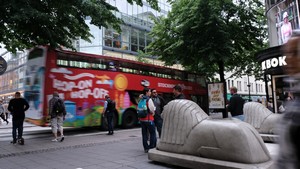 Never having been to Stockholm, we’ve arrived two days prior to sailing the Baltic Sea.  To my eyes and ears the language isn’t romantic  like Italian or French.  Could be too many consonants…lots of j’s and g’ linked together.

We are staying near Gamla Stan – Old Town – founded in 1252.  It is the largest and best preserved medieval city in Europe.   We are out in the fading light of the evening….Sunset isn’t until almost 10 p.m.

It has been wet and rainy while walking along the ocean front the next morning,  We turn the corner to head for the Royal Palace and the wind whips the brims of our hats.   Sweden’s palace is one of the largest in Europe with over 600 rooms.   Unfortunately it is a flat building and  does not have a great deal of architectural interest.  The guards, however, are looking very smart in their uniforms and stern faces.

The “Hop On Hop Off” us takes us on a tour of the city by land by bus and sea by boat.  Stockholm is built on 14 separate islands and has 57 bridges to connect the citizens to each other.   I highly recommend the boats.  The highlight of our visit will be “Fotografiska”  the photography museum.  The exhibits are provocative and challenges us as the viewers.  The award winning kitchen is packed.

We return to our hotel by walking down Drottningg, the pedestrian street.  An attractive and congenial pickpocket tries her hand getting into Terry’s camera bag.  Fortunately for us, she is unsuccessful.

Prehistoric looking cranes are everywhere taking a toll on the beauty of the city.  Security for a three-day conference attended by Obama, current and past prime ministers and presidents from the EU has brought traffic in the city to a stand still.

Over 1,000 yellow shirts streamed by the glass wall of our restaurant overlooking Old Town.  This is a city the packs the most it can into its long days of summer.

We sail to Tallin  in the morning!