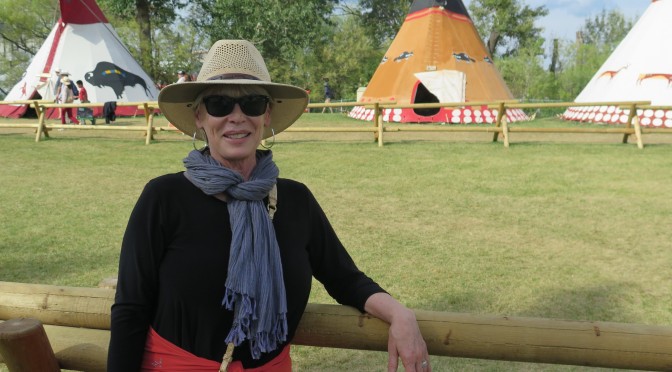 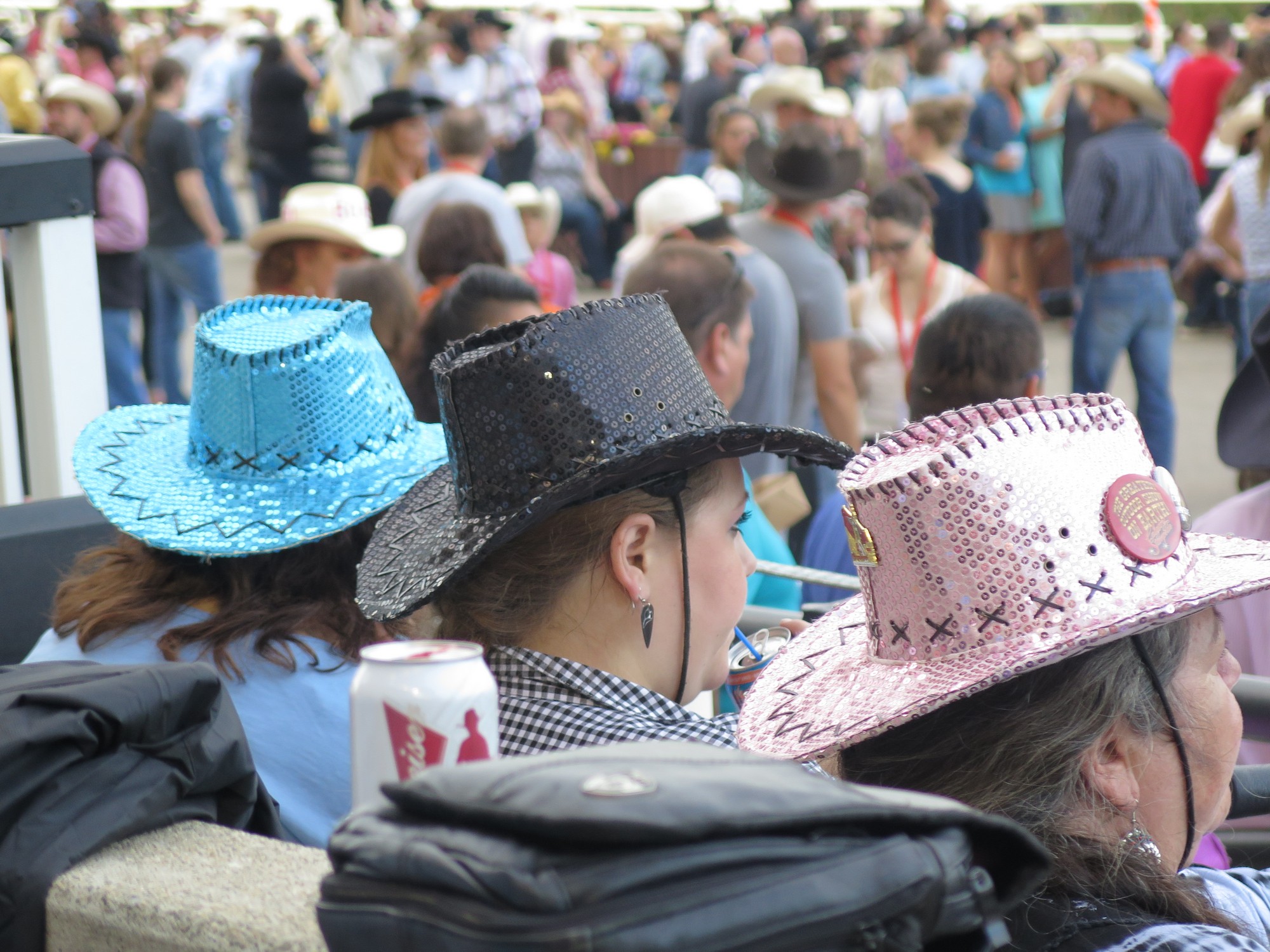 Word to the wise, avoid the mile long lines and purchase your Stampede tickets online in advance. It is hot by Calgary standards as we walk to the fairgrounds. Yesterday when we drove into town, we saw hundreds of cowboy hats marching to the stampede.  Mom hats, dad hats and little baby hats…all shapes, colors and sizes. Do not be caught without a hat at the stampede.

Billed as the “Greatest Outdoor Show on Earth” it draws hundreds of thousands and for 10 days it is all things Cowboy and Indians. On opening day hundreds of horses are paraded through the streets. Later in the week men and women climb on the backs of four legged critters, some with strong objections and their riders are thrown onto the ground to the roars of crowded bandstands.

We go to the last day’s festivities,  marching with hundreds into the middle of this organized chaos. 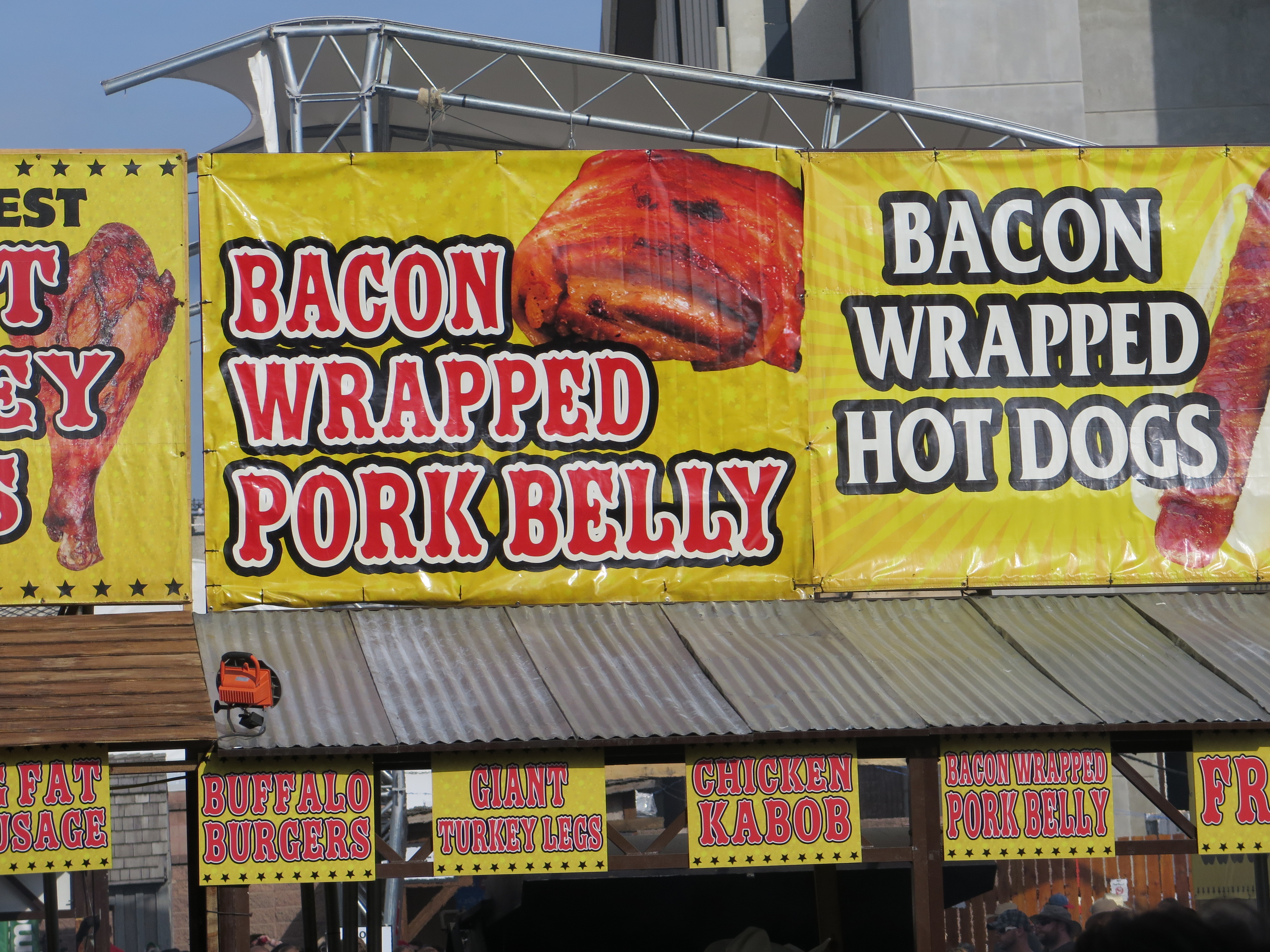 Vegetarians shield your eyes.  Calgary is know for oil and beef and the fair’s midway does not disappoint. Bacon wrapped pork belly, bacon wrapped hot dogs, turkey legs the size of footballs, 2’ long corn dogs, barbecued ribs the Flintstones would have been proud to serve…. it goes on for miles.

And then there are the animals up close and personal for us folks who generally only see creatures on TV. The cows, bulls, steers, pigs, piglets, sheep, lambs, goats, chickens, mules, donkeys and horses, especially the horses are beautiful and close enough to feel their breath on your skin. Some of the draft quarter-horses are 17 and 18 hands high…skyscrapers on legs. Soft, velvet mussels just inches away. I am in love with those dark eyes under long lashes.

Somehow we wind up between buildings and watch the junior high school band get ready for the big show at the end of the chuck wagon races…the show and fireworks are the big finale to the stampede. $100,000 in prize money will be given to the winner of the race and these guys are serious about racing their 4-horse thoroughbred teams to victory.

We join the masses in the stadium. And they are off!!!

At first glance it is a confusing bit of business…men in wagons, men walking horses beside the team harnessed to the wagons, red numbers painted on large white barrels….all the while an announcer’s voice gives the audience the CV for the various teams. Don’t look away, in an instant reigns are slapped against the backsides of those beautiful animals and the wagons fly around the barrels and the wagons disappear from view behind the opposing bandstand.

In mass the crowd turns, all eyes are on the mega-sized televisions that show the four wagons thundering down the backstretch. Everyone is on their feet, stomping and cheering.  Once again all eyes turn to the track, the wagons round the turn and come into view. The lead chuck wagon driver is on his feet, his mud-splattered white shirt billowing behind him, mouth open in a soundless call to his team, faster, faster.  Two competitors are nose to nose.  The necks of the horses straining, legs pounding in unison across the finish line.  Screams, hoots, hollers, clapping of hands, fists waving in the air add to the excitement of the earth shaking finish. We, too, are caught up in the excitement….we are hugging each other, smiling and laughing…the winner is back in the ring, a standing ovation and a tip of his hat to the crowd.

The sun is down, the stage lights come up and the musical finale begins. It’s bright, lots of moving parts, singing and dancing, however, to us pales in comparison to the races. We excuse ourselves, head down the staircase past three cowboy hats trimmed with tiny colored lights and head for home.