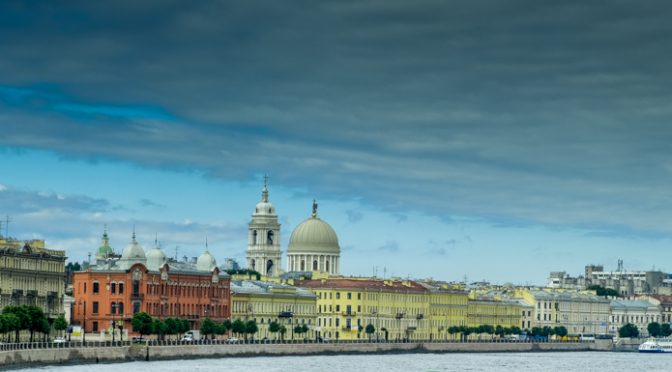 We open the drapery in our cabin.  Just across the bay is the Lakhta Center, an 87-story skyscraper, the tallest building in Russia.  The locals call it the “Corn” building because of its shape.  The skyline of St. Petersburg is protected from the construction of modern buildings and the Lakhta Center is just outside the buffer zone.

We join our fellow passengers in six long lines marching toward the immigration stations.  Stern faces stare at us through thick glass.   We were told not to be social, engage or smile at the female officers behind the glass.  They take their job very seriously.  I guess there might be a spy in the midst of the elderly baby-boomers.

Much to our surprise we share the lines at immigration with Brett Hume and his family.  He is a lot taller in person.  We made it through without incident and board a small van to see the highlights of the city.

Our time is limited and this is not a city where we can roam freely. We are set to visit Church of Our Savior on Spilled Blood built by the son of Tsar Alexander II who was killed on that very spot in 1881; St. Issac Cathedral completed in 1858; Peter and Paul Fortress, the burial place for many Russian Tsars; and Peterhof Palace.

Tsar Peter the Great understood to compete and grow as a country, he would need to establish a port city.  Russia was land locked.  His his victory over Sweden provided him with the opportunity of establishing an economic powerhouse, St. Petersburg founded in 1703.  His unconventional upbringing and exposure to the Western world inspired him to incorporate practices from Europe into the building of palaces, cathedrals as well as buildings for medical and educational institutions.  In 1712 he transferred the Government from Moscow to his new city.

Peterhof Palace’s interior and exterior and forested gardens were patterned after, but were built to rival The Palace of Versailles in France.  As an example, just steps from the palace are over 150 fountains with gilded statues of mythological characters.  The world wars took their toll on the palace and grounds.  After the siege of Leningrad, the citizens united to rebuild this symbol of Russian greatness. At 11 o’clock each morning hundreds of visitors wait patiently for the fountains to come to life.

The life blood and principal waterway of St. Petersburg is the River Neva.  Over 400 bridges connect the 60 additional rivers and canals that criss-cross the city.  Peter planned his city after Amsterdam and Venice.