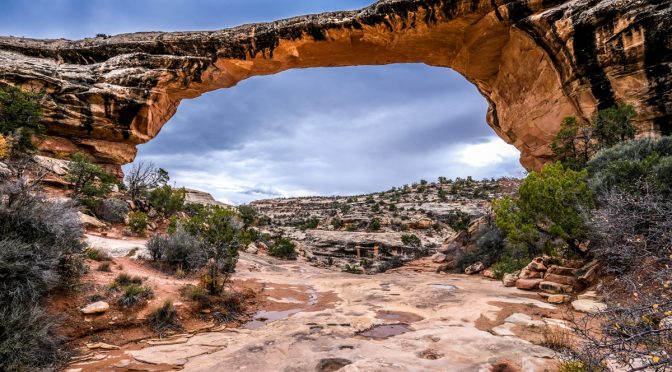 Canyon de Chelly, our next destination, is 90 miles south of Monument Valley.  We decided to take a short detour and explore the Natural Bridges Monument before settling in for the night.

The road climbed from the valley floor under a stormy, gray/blue sky.  The sandstone cliffs were smeared with bright green, orange, yellow and purple foliage.  Just before the top, the wide, paved road disappeared.  Our tires now crunched their way along a narrow, red dirt road.  Terry navigated the sharp switchbacks while I looked down over the edge.  There were no guard rails.

Around the last bend, we found a turnout .  We threw caution to the wind and grabbed our tripods and mimicking a couple of Billy goats climbed up over boulders and through sage to the top.  Our shots of the valley below are some of the best of the trip.  I could have stayed for hours watching the shadow play of the sun and clouds on the landscape below us.

I don’t think I had ever seen a natural bridge before.  Small streams carve natural bridges, just like a hot knife through butter…..if you give them thousands of years.  Water’s relentless action against the cross bedded sandstone of the White and Armstrong canyons did just that….and these natural bridges are wonders indeed.

Owachomo, the image at the top of the page, the oldest and the closest to disappearing, has a dry stream bed.  All natural bridges are temporary as their surfaces weather, wear and weaken to finally crumble and disappear.

In 1908 President Theodore Roosevelt proclaimed Natural Bridges Monument, creating Utah’s first National Park System area.  Cass Hite, a prospector, discovered the bridges in 1888 when he wandered up White Canyon from his base camp looking for gold.

There are a system of trails you can follow down into the canyons to view the bridges from below.  We choose to hike to the bottom of Sipapu, the second largest natural bridge in the world with the shortest hike, a mere 1.5 miles.  If you have the time, you can view all three on a 15.7 mile loop.