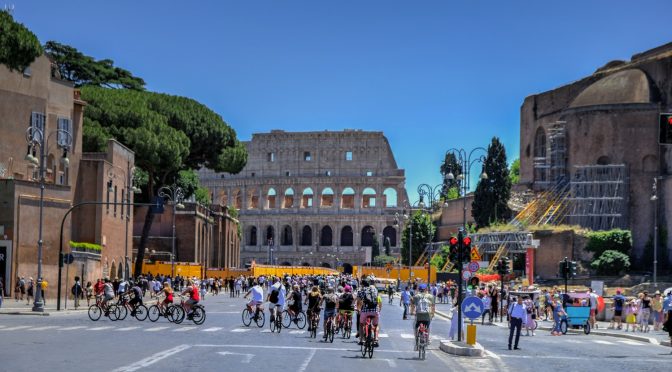 The emperor was a genius. He decreed, “take them all to the sea when the thermostat pops its top”.  The joke is on us, it will be close to 100 degrees today and we traveled 7,000 miles to get away from the heat.  It has been 51 years since I was in Rome.  In the late 80’s, Terry’s business took him to “The Eternal City” several times a year for about eight years.  When I was here, the city statues were white.  When he was here they were black with soot.  Today, they are white again, well, almost all of them.

We decided to only try to see three of the famous sites.  The the Flavian Amphitheater or The Colosseum is still imposing.  Road construction here is constant, yet the Colosseum was built in only nine years.  Over 400,000 people and over a million animals died to the roar of crowds while celebrating festivals and victory celebrations.  I remember roaming the monument in freedom, today that is not the case.  Fences bar entry unless you pay the toll only to fall in a long line of shuffling visitors, all with cell phones in hand taking “selfies”.  We didn’t bother.

Next, The Spanish Steps built in 1723 connecting the Trinita dei Monti church with the Spanish square below.  In the 17th century the Spanish considered this their territory.  The French planned a statue of King Louis XIV at the top of the staircase, however the pope refused and the plan was never executed.

We saved the the Trevi Fountain for last.  You hear it before you see it. For over 400 years, this site supplied water via an aqueduct to the people of Rome.  Glistening white marble statues of Oceanus accompanied by sea-horses and Tritons emerge from the sparkling green waters.

I’m not sure it was ever true young, attractive Italian boys pinched the bottoms of ladies.   I wasn’t pinched on either of my trips.  I did see lots of handsome uniformed Italian boys in camouflage fatigues cradling their sub-machine guns.  They eyed the crowds through their wrap-around sun glasses.