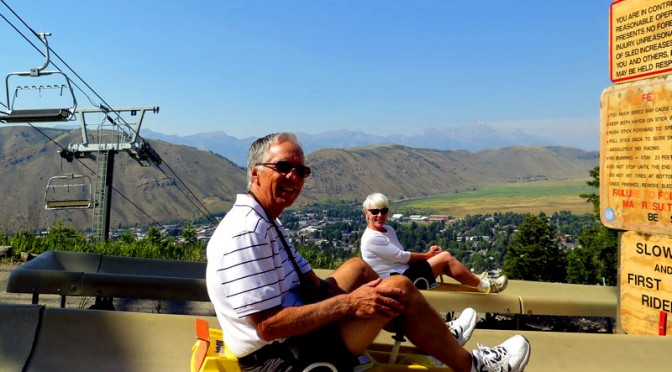 We spent so much time in Grand Teton and Yellowstone; we didn’t have enough time to explore the city of Jackson.   Most everyone I know calls it Jackson “Hole”, but it’s just Jackson, a town in the Jackson Hole Valley of Teton County

The main industries include arts, entertainment, recreation, accommodations and food services. William Henry Jackson was the first to photograph the Teton Mountains and Yellowstone. His photographs, along with Tom Moran’s sketches were submitted to Congress which led to the creations of the national parks. The first ski tow rope was built at Teton Pass in 1937. We stayed at the Snow King Resort which was established in 1930.

Okay, now for the fun part…there are more hiking trails that you can shake your walking stick at; miles of paved bike paths through meadows, rolling along river banks and through quaking Aspen trees; and then there is “dry Alpine Sledding”. On our last afternoon in Jackson, we were under an umbrella eating lunch on the terrace looking up at the mountain top behind the hotel. Two parallel light brown half barrel, luge-like trails snaked their way through the intense green grass and wildflowers down the steep mountainside.

We watched with interest as every so often a small curled shape would race to the bottom. We watched closer, that curled shape was a person on a sled! No special equipment, just them and the sled. We looked at each other and said “Why Not?” After a short hike, we were scooped into a chair lift to the top.

Bright yellow sleds were placed on the tracks, we hopped aboard , took hold of the red handled control stick, bent forward and were off…..we raced each other to the bottom, I screamed like a girl and went as fast as I could. OMG….it was so much fun!!! Where’s that Go-Pro camera when you need one?