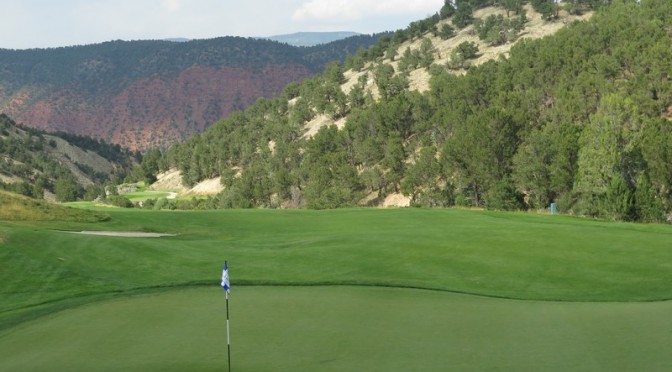 Locals refer to it as “the best kept secret in the valley.”  Stunning views of Mount Sopris from some pristine perspectives. An 18-hole, alpine course where the first nine are fairly traditional and the back nine layout encompasses greens elevated above canyons deep in the forest.  The golf cart path can be almost 45 degrees in some parts!

Designed by Arthur Hills, this semi-private course was refined by Tom Lehman in 2014.  Its 7,224 yards include a 495-foot gain in elevation from the pro shop to the #12 tee.  This is more than golf, it’s an adventure.  This originally was a nine hole course until the recent completion of the back nine.  The canyon terrain of the back nine offers amazing views of the surrounding mountains.  Number 10 thru 14 are built in a canyon deep the deep forest.

I was playing the Vail Golf Course with a couple (Tom and Judy) from Stockton, California when they happened to mention Ironbridge.  Judy said she enjoyed the scenery, forgot about the game and  was totally involved with taking pictures on the back nine.  Tom said don’t even think about walking the course….the distance between the 13th green and the 14th tee is almost a mile.  If you play after 3PM you can play for $39.00.

So I asked Mrs. Terry if she would like to caddie and take some pictures.  She agreed if she could drive, so off we went.  I have to admit, there were some white knuckle moments on the wooden bridges!