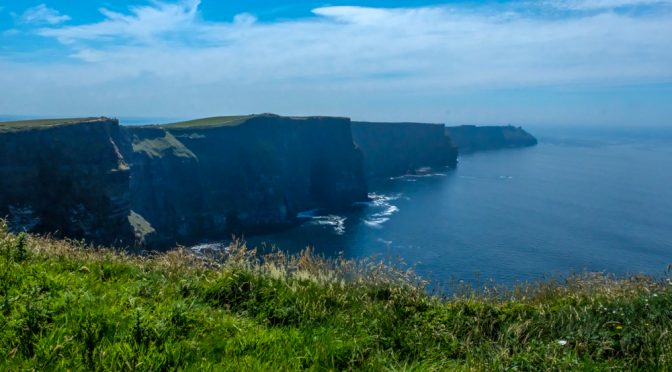 We have left Killarney and are on our way to Galway via the Cliffs of Moher.  Generally visitors to the cliffs are decked out in rain gear, water repellant boots, umbrellas, etc. and the clouds and haze will actually hide the cliffs from view.  Not today.  Sandals and sundresses are the attire of the day.

The wind gusts do make it a “hold on to your hats” day and we find that is critical when getting close to the edge….I’m getting ahead of myself.

The cliffs are about 5 miles wide and rise almost straight up over 700 feet above the Atlantic on the western seaboard of County Clare.  On a clear day like today you can see the Aran Islands, Galway Bay, as well as the Maum Turk Mountains in Connemara.

The name is taken from a ruined promontory fort “Morhar” which was demolished during the Napoleonic wars to make room for a signal tower at Hag’s Head.  The cliffs, however, were formed about 320 million years ago.  A river flowed down bringing mud and sand with it, dumping it all over this area where it settled and eventually formed the rock layers seen today.

It is estimated that over 30,000 pairs of sea birds nest here.  Puffins, Guillemots, Razorbills, Fulmars, Kittiwakes, Peregrine Falcons and Chougs just to name a few.  In 1835 O’Briens Tower was built as a viewing point for tourists.

There is a farmer who lets his cattle graze near the fence line of the path to the outer areas of the cliffs.  The bull let us know he didn’t appreciate anyone getting too his domain.

We walk upward on the path to take in the view.  We climbed over a fence and began walking on a grassy path outside the park.  We are not alone.  There are hundreds of us roaming the cliffs.  If you look closely at the panorama shot, you can see the folks walking the edge of the cliffs. 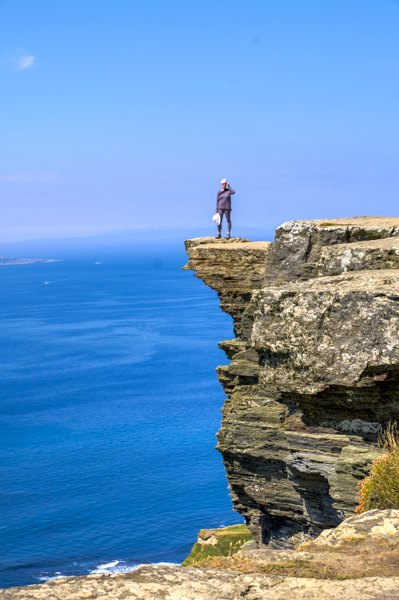 Terry snapped a picture of me.

Boy that’s a long way down!