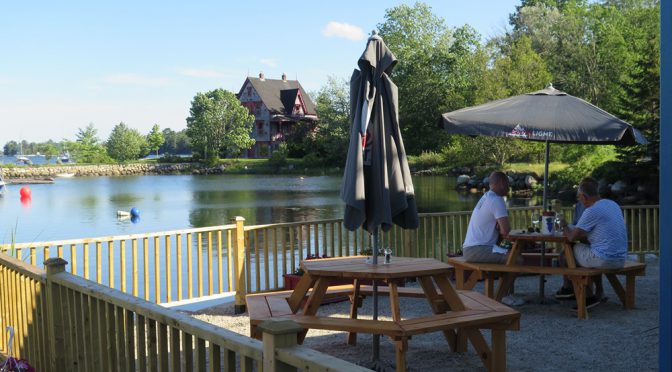 The Chester 2017 summer theatre festival was in full swing.  We chose the matinee performance of “The 39 Steps”; a melodrama adapted from the 1915 novel by  John Buchan and the 1935  film by Alfred Hitchcock.

Four actors perform; one actor stays in character throughout the play and the other three perform 130 different roles in 100 minutes!  It is fast paced and hilarious.

We followed the adventures of the handsome hero Richard Hannay, complete with stiff-upper-lip, British gung-ho and pencil mustache as he encountered dastardly murders, double-crossing secret agents, and, of course, devastatingly beautiful women.  We were spirited away from the hero’s bedroom where the murder was committed; watched as he climbed outside a speeding train…pipe clenched in his teeth; while handcuffed to a beautiful woman they careened down a pot hole filled lane in an old car driven by secret agents; hid in the villain’s castle until finally he solved the case and got the girl.

If mistakes were made…it was “on with the show!”  At one point the telephone was ringing and continued to ring even when the actor picked up the receiver….he quickly hung up, phone continued to ring…he would pick up…ring…you get the idea.  The play is very physical….the actors roll around on the stage, juggle, shoot pistols,  jumpe off the stage,  sit down, stand up, fall down, sing, rant and rave all while running  through the aisles and audience.

The city of Chester has a beautiful bay, lovely Victorian homes and at Chester Basin a 4 star local restaurant….the Seaside Shanty.