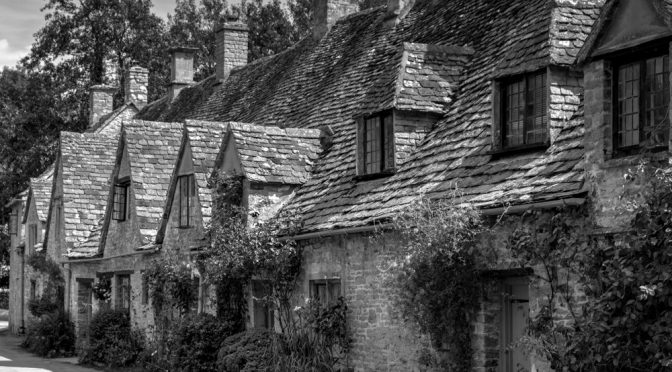 We won’t be going to Chruchill’s birthplace since “CountryLife” took over the palace.  Personally I think Terry was feeling quite gleeful about the whole thing.   I detected a smirk on his face as he got the news.  Can’t say I blame him.  I think he would rather read under the trees.  I got to looking at what to do while in the Cotswolds and found two villages nearby.

We left the cottage at mid-day.  The sun high overhead bleaches the color from images, especially landscapes at mid day.  I had read black and white photography in a 1×1 format would possible make bleached out colors extraordinary.  So our blog is in black and white.  I think we got some terrific shots.

Bibury is on the banks of the River Coin, a strict architectural conservation area.  Bibury is highly praised for its appearance and it is a draw for tourists.  Arlington Row, our lead photo, is a notable string of rural stone homes.  A pen and ink drawing of this rural village can be found on the inside cover of all United Kingdom passports.  We stopped into a tea house for a spot of lunch and decided to have dessert instead.  We chose ice cream sundaes and they hit the spot!

Cirenscester (pronounced: siren chesire) was next.  This town was much more interesting to me.  I did like how changing from color to black and white did made the subjects and architecture more interesting.  We played with the shadows, as it got later, and got some great photographs!

The Romans were here in 49 AD building roads and conquering Wales.  St. John the Baptist parish church dominates the center of town.  The abbey was destroyed in 1539 when Henry VIII wanted to marry Anne.

Food thrives in Cirenscester.  Jesse’s Bistro is so popular we couldn’t get a table for dinner.  http://www.jessesbistro.co.uk/  look at the menu and your mouth will water.  We did get a seat at Cote https://www.cote.co.uk/brasserie/cirencester/ and had duck confit and tuna steak…yummy!

A friend wrote he was enjoying the blog and teased me that he hadn’t read this much since reading the “Tale of Two Cities”…. Thanks Dan for the inspiration for this blog title.