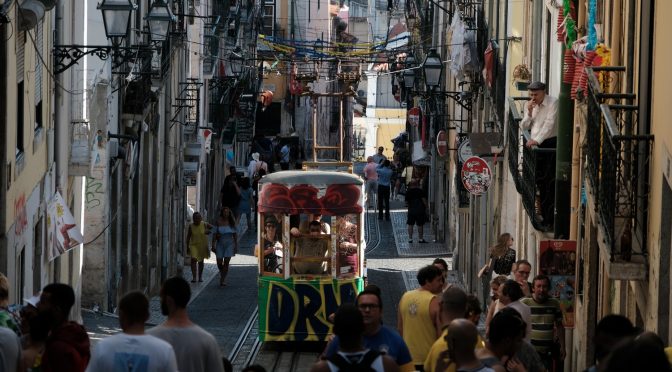 No, not that kind of love, although he turns out to be a very nice gentleman.

I read articles by Andy Mumford in Fujilove, a digital magazine.  He wrote a compelling article about long exposure photography which is something Terry is interested in learning.  He also conducts photography workshops in Iceland where Terry wants to go next year.

So I sent an email off to Andy with the hope to work with him while in Lisbon. I tend to be rather naive and optimistic.  I think all things are possible.  Terry on the other hand is very practical.  He cautioned me not to get my hopes up.  Well, Andy wrote back and the dates in Lisbon worked!

The arrangements were made via the internet in January to meet mid-June.  I’ve been doing the happy dance ever since.  That day has arrived…..we will work with Andy for two days.  Today we will be exploring the streets of Lisbon.

Andy traveled the world and traded the damp, rainy climate of England for the warm tropical climate of Lisbon over twenty years ago.  While working at the British Embassy, he met his wife, Teresa, and never looked back.  He has made his living as a professional photographer for over 15 years.

Every study or be mentored by someone who is at the top of his or her game?  The passion for their craft is evident.  They are fully engaged in what they are the best at….no diversions, only focus.

This is Mr. Mumford.  He talked about how he works as a photographer.  Why he takes the type of photos he takes.   Why photography is, next to his lovely wife, the center of his life.  To have your breath taken away,  go to www.andymumford.com.

He and Terry volleyed the technical jargon back and forth.  My head swiveled back and forth between them.  I was getting dizzy.   You all know Mr. Terry is not much of a talker….how can he get a word in edgewise with me at his side???  Well, I just stood back and they talked for hours not just about the operational business of the camera, f stops, ISO and shutter speed, but how images convey the stories and emotions of their subjects.

He encouraged me to think differently.   He said, “Point the camera into the sun….with the right framing, you will get a powerful silhouette”.   Well, I did and he was right.   Strong contrasts make the best black and white shots.

Terry began to look at subjects differently.  No more point and shoot….be purposeful, look at the angles and curves.  See the chaos, make it beautiful.

Andy encouraged us to find a way to express ourselves in the photographs.  See what is interesting to us?  How do we communicate that to others?  Sure we can still take “point and shoot” photos telling the story of our vacation….and we can also take a moment, compose a shot and reflect the way we see the world and want to share with others.

So there we were in the central train station, the underground and on the streets taking photographs we would have never thought to take….using the light and making beautiful photos.

Tomorrow we begin at sunrise and Terry gets to experiment with long exposure.