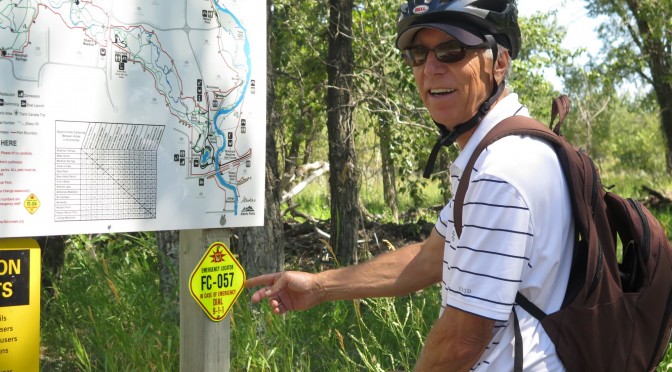 Several locals said “You have to ride “Fish Creek”, however, no one told us where to park.  This afternoon we  learned that is the most important bit of information to have before one sets off.

Our GPS took us directly to a unpaved road at the base of an underpass near the McKenzie Meadows Golf Course at the southern most tip of the park.   We thought that was odd and it was only after riding in the park did we see that were several paved parking lots.  It is such a beautiful park there was no reason to complain.

We circled Lake Sikome before we realized that we were going in the wrong direction….so we backtracked and found the trail that would lead us toward the intersection of the path and Macleod to ride through the densely forested area of the park.

We  had ridden about 12KM through grassy meadows with another 12 KM to  get to wooded area of the park….and we would have to ride that distance again to get back to the car.   My math sometimes fails me when I convert kilometers to miles but 48 kilometers is a long, long way even if there was plenty of daylight left.

Thankfully Terry was in agreement, we turned our bikes around and made a  dash back to the car with a stop at Annie’s Café  at the Bow Valley Ranch for a cold drink and ice cream.

A couple was just finishing their vows as we finished our ice cream.  The stunning bride and handsome groom led the wedding party  from the pristine white tent adjacent to Annie’s past our bench into the park for photos.

We will return tomorrow morning, park in a better location and complete the loop of the park…

Here’s a couple of links :