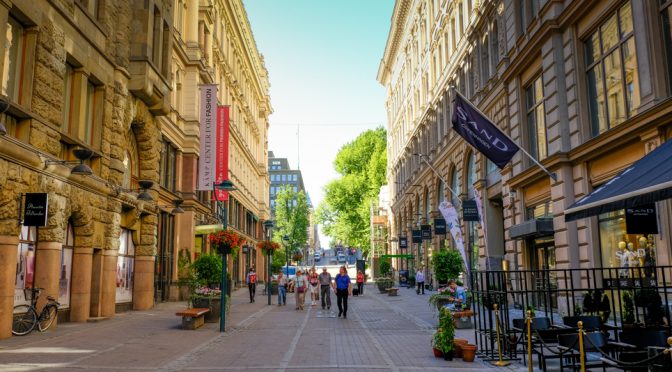 This capital of Finland is a vibrant seaside city comprised of islands and green areas.   It will be easy to explore on foot and we hope to capture the culture of their street life, architecture, forest and lakes.  We’ve been told the Finns are quiet and reserved and only reveal their “party side” at night in local pubs and bars.

The archipelago of Helsinki consists of around 330 islands. For years this city was an outpost for the Russian empire and was modeled on St. Petersburg.  A fire in 1808 devastated the city.   Johan Ehrenstrom, an architect, is responsible for the grid pattern of wide streets lined with Neoclassical and Empire-style buildings.  Helsinki became the capital in 1812.  Later when Finland gained independence, the architects and designers built modern glass structures as well as patterned new buildings from their own folklore and culture.

The Helsinki Cathedral, finished in 1852 is located in Senate Square and the centerpiece of downtown Helsinki.  On the steps of this neoclassical marvel Warren Beatty shot scenes for “Reds”.  It is quite common for Helsinki to be substituted for St. Petersburg for western movie location shoots.

Our walking tour included not only the Cathedral and grand boulevards, but the Railway Station (Finnish National Romantic architecture), Market Square/Market Hall; the low modern library building; the music center, the children’s museum, the Temppeliaukio Rock Church blasted from solid granite and topped with a copper dome; the National Museum of Finland and Sibelius Park where a shining monument composed of 600 steel pipes honors Jean’s compositions.  I gave up on trying to read or pronounce street names…Mannerheimintie, Kaisaniemenkatu, Kaartinkaupunki, or Arkadiankatu to name a few.

There are almost as many saunas as residents and those who don’t have the luxury of their very own, there are many public saunas.  Many are located on the shore when once you have been properly heated, you then jump into the icy waters.  Another popular pastime is to sunbathe at lunch and there are many green grassy parks in which to enjoy the outdoors…..sunny days are a premium.

We return and Sonu has delivered some chocolate dipped strawberries and champagne….it is good to be in a penthouse and queen of all she surveys!