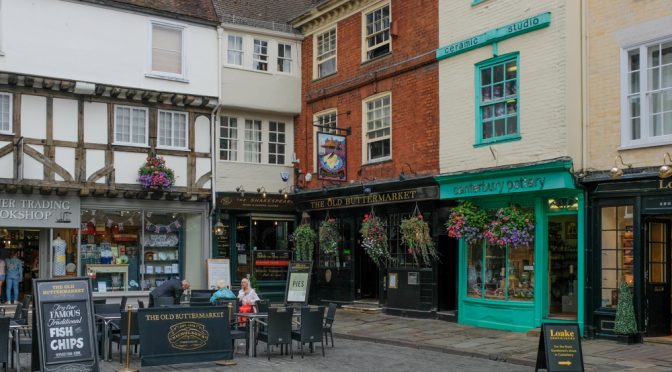 Today we become a modern day pilgrim as we travel to Canterbury to experience the history and photograph the architecture.    As I walk the streets, I see fellow travelers as diverse as Chaucer wrote about in his great “Tales”.   People from all walks of life and from all nations are drawn to Canterbury.

Thomas Becket who became a martyr and saint after his murder is the reason for the pilgrimages.  He was named by Henry II as the Archbishop of Canterbury in 1161.  He and Henry were boyhood friends.  Becket served in Henry’s court as chancellor.  Henry mistakenly thought he would have an ally in church affairs with Becket as Archbishop.  Becket failed to be a “yes” man to the King and took his role quite seriously.  Becket would not submit to Henry’s political schemes involving the church.

When Henry proclaimed “Will no one rid me of this troublesome priest?” four knights trying to gain favor with Henry did just that in 1170.  They murdered Becket in the cathedral.  To undermine Henry, the church declared Becket a saint setting in motion events that would make Canterbury equal to Rome and Santiago de Compostela as a major pilgrimage sites in the Christian world.

Founded in 597, Canterbury Cathedral is the oldest and most famous Christian structure in England and was rebuilt in 1070 and 1077.  The Gothic style east end greatly increased the size of the cathedral and was used to accommodate the shrine to Becket.  The Corona is said to house the top of his skull, now a religious relic.

Fast forward to 1538, Henry VIII has shut down all the monasteries and needs money to fight his wars.  He summons the dead saint Becket to court to face charges of treason.   When Becket fails to appear, he is found guilty of treason and all the treasures of his shrine are confiscated.

Canterbury languished until an influx of Huguenot and Walloon refugees revived the weaving trade.  Christ Church Gate is the entrance to the remains of the monastic buildings.  The Christ statue above the entrance was removed in 1803 and not replaced until 1990.  There has been a school on the grounds since the middle ages.

Today only the west gate and a portion of the wall built by the Romans remain.  I experiment with street shooting as we wander the many pedestrian streets. 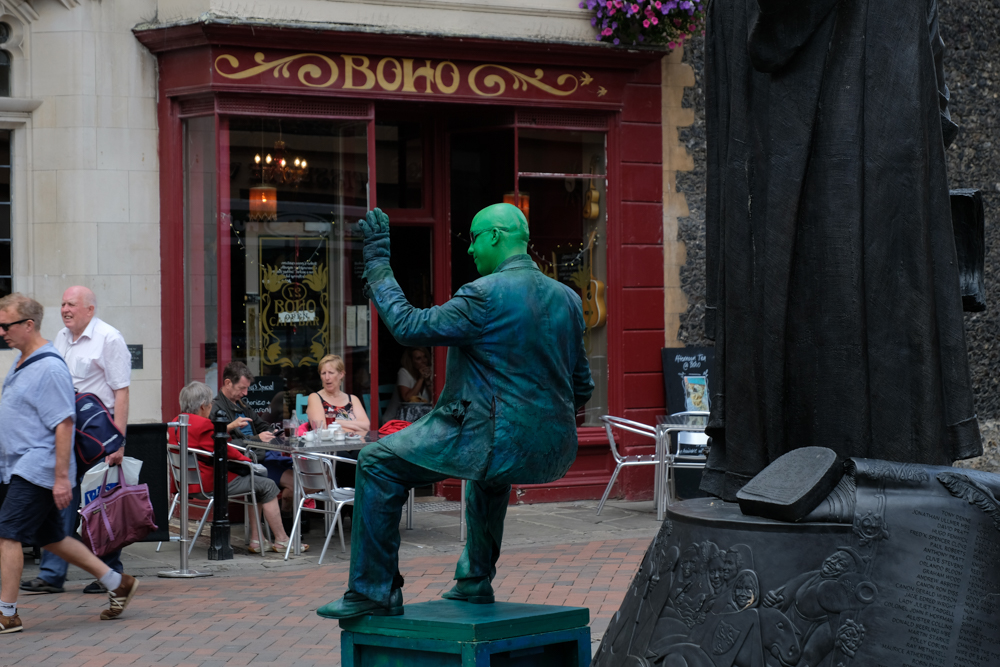 erry spotted the green man who was in the streets of Oxford.  He is seemingly suspended space and he sits and waves to passing visitors hoping they will leave a tip in his hat.  I’ve gone over to the dark side…. black and white gives the shots from the street the desired gritty look.

I highly recommend the walking tour.  We spent an enjoyable morning with Dorian who has lived in Canterbury since 1974.  She brought the city to life with the tales of political intrigue.  She took us to a little known garden in the middle of the old town centre.  The Greyfriar’s Chapel and Franciscan Gardens were established in 1267.  If you look over the edge of either of the stone bridges you may see punt boats taking visitors for a ride on the river.