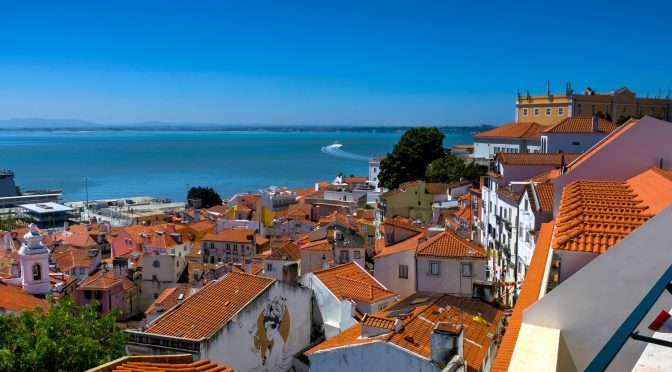 The world at one time was decreed to be flat.  To sail into the horizon was certain doom.  The Portuguese had different ideas.  They refused to be glued to the land.  They mastered the Atlantic.  Beginning in the 12th century and for about 300 years, Portugal’s affinity for the sea made her a world superpower.  Vasco da Gama sailed to discover the route to India, Fernando Magellan heroically circumnavigated the world and Bartolome Dias sailed around the horn of Africa.  Portugal established colonies all over the world, the most famous being Brazil.

It is said Lisboa is one of the oldest European capitals.  It was founded 400 years before the Roman Empire.  Remains of settlements by the Celtic, Phoenicians and Carthaginians have been found.

In the late 15th century Portugal’s decline began.  Their king died without an heir during a war in Africa.  The King of Brazil claimed her throne.  A military coup d’état in 1926 sealed her fate.  Antonio Oliveira de Salazar, self-proclaimed dictator, pulled her from the world’s stage.  He kept her isolated and backward.  In 1974, his dictatorship ended and an improvised Portugal re-joined the world.

Portugal is facing a challenge.  Some of the things pulling her out of poverty and unemployment are also diminishing her charm.  Wealthy foreigners are changing the face of the city.  They are buying blocks of old buildings, changing their architecture and turning them into monthly rentals or Air B&B’s.  These apartments are unaffordable by the locals.

Brands found at local shopping malls are replacing artisanal goods in the storefronts on the wide modern streets.

We watched as the crowds marched in unison up the blocks with eyes glued to the phones in their hands.  We held our breath when some we watched never looked up to see if it was safe to cross at a street light.

Romantic charm can be found; you just have to go off the beaten path.  See the important sites and then duck into an alley.  Go where McDonald’s and Burger King dare not to go.  You will be rewarded.

In the smaller neighborhoods the pace is slower and the streets are shaded by tall buildings.  Neighbors smile, make eye contact and greet us with “bom dia” (good day).  We return their greeting.  Some will ask where we are from and then wish us a safe and pleasant journey.  We found them warm and welcoming.

Here meals are slow and social.  Take away is not common.  I loved walking in the evening, turning a corner and finding a café with outdoor seating and lights strung in the tree branches.   A local musician would be playing and a marvelous aroma would fill the air with the promise of a good meal.  These experiences are at the heart of our memories of Lisbon.

Very early tomorrow morning a taxi will collect us and take us to the airport.  We are off to Dublin to begin our road trip.